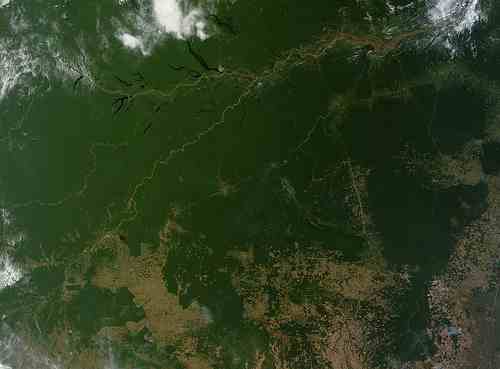 Despite small signs of recovery in previous years, the Amazon rainforest – the ‘lungs of the Earth’ – is in danger after an increase in deforestation rates. And according to the Brazilian government, most of the forest has been cleared illegally.

Data taken from satellites between August 2012 and July 2013 by the Project for Satellite Monitoring of Amazon Forest (Prodes) shows a 28% increase in deforestation, especially in the states of Amapá and Mato Grosso.

The Amazon forest – one of the greatest and most important ecosystems and sources of oxygen on Earth – has been often cleared to make room for agricultural land and for illegal logging.

Greenpeace has said that the rise of deforestation is the direct consequence of the concessions made by the government to rural lobbies.

Márcio Astrini, co-ordinator of Greenpeace’s Amazon campaign, said, “The climate of ‘already won’ after consecutive drops of deforestation, coupled with amnesty brought with the approval of the new Forest Code, gave breath to those who profit from forest clearing and fuelled the rural fury, which has been trying to shape the Brazilian legislation according to their economic interests.

“Deforestation does not reach the Amazon in isolation. It comes with slave labour, rural violence and land grabbing. Moreover, the forest provides essential services to the country, accounting for much of the rains that irrigate our crops and supply the water reservoirs of large cities.”

However, the environment minister Izabella Teixeira responded by saying that only a small part – less than 20% – of the reported deforestation was caused by the government’s licences. She said that most of it was illegal and that the 28% increase was ‘unacceptable’.

“I make the commitment to reverse any increase in deforestation in the Amazon”, she added.

“And for this we need the support not only of state and local governments, but also of Brazilian society. We will fight until the last minute to eliminate illegal deforestation in the Amazon.”