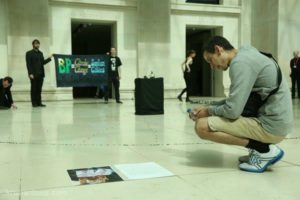 Activists protesting against BP have taken over the entrance to the British Museum’s new exhibition Sunken Cities – Egypt’s Lost Worlds which is sponsored by the oil giant. The protesters have created artwork of their own to symbolise the “human rights violations” BP causes through its operations in Egypt. Earlier this month Blue and Green Tomorrow reported on BP’s interference at various UK museums it sponsors.

Art activists have created a large-scale art work at the press launch of the Sunken Cities – Egypt’s Lost Worlds exhibition’s entrance. Formed of crude oil from the Gulf Coast, a teargas cartridge from Cairo’s Tahrir Square and 340 lines of black stones, the art piece symbolises how BP’s operations in Egypt are ‘surrounded by human rights violations’. Controversy around BP’s arts sponsorship has been escalating after Art Not Oil published a damning new report exposing BP’s ‘corrupting influence’ over the museums it sponsors.

Jess Worth, a member of ‘BP or not BP?’ said: “The British Museum says this new exhibition will “tell stories of political power and popular belief, myth and migration” – and it does. BP’s sponsorship is a story of gaining favour with repressive regimes, extracting fossil fuels and driving the rising sea levels that will cause people to flee sinking cities in the future. That story is already unfolding in Egypt. Meanwhile, the British Museum peddles the myth that BP is generous and ethical when it displays the company’s logos.”

The lines of stones in the artwork represent the 340 people forcibly disappeared in the four months prior to BP signing a $12 billion dollar deal with the Sisi regime – a rehash of a deal it had made with the Mubarak regime. The total number disappeared under the Sisi regime may run into thousands. Teargas is a weapon that was used both to repress popular protest in Tahrir Square during the revolution but also those who actively opposed BP’s operations in the country.

Protests in Idku in the Nile Delta in 2011-2012 pushed BP to freeze construction of a gas terminal for over a year, before conceding not to build anywhere near the town. Under the current regime of Abdel Fattah El-Sisi, opposition has been quashed with the introduction of a repressive anti-protest law and BP’s plans have been steamrolled through.

Today’s intervention follows an escalation in protest around BP’s sponsorship of the British Museum just as it is deciding whether to renew its five year deal with the oil giant. It was announced in March that after 26-years BP’s sponsorship of Tate would come to an end. It was followed by the news just weeks later that after 34 years, BP would no longer be a sponsor of Edinburgh International Festival.

A new report by Art Not Oil launched on May 3 exposed the multiple ways BP interfered in the museums and galleries it sponsors, from curatorial decision-making to security procedures. The British Museum’s new director, Hartwig Fischer, was also welcomed on his first day with a letter from almost 100 cultural and political figures calling on him to drop BP sponsorship. Signatories included the Oscar-winning actor, Mark Rylance, and Chair of the JJ Charitable Trust, Julian Sainsbury.

‘BP or not BP?’ is an activist theatre group that has organised theatrical protests and creative interventions at a range of oil-sponsored institutions. It successfully campaigned for the end of BP’s sponsorship of plays at the Royal Shakespeare Company in 2012 and, alongside others, the end of BP’s sponsorship of the Edinburgh International Festival. They are part of the Art Not Oil coalition alongside groups such as Platform, Liberate Tate and Rising Tide UK.