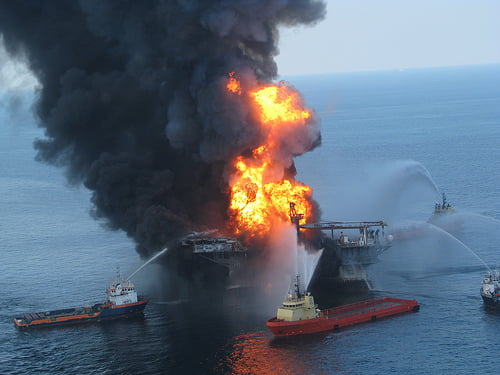 Oil giant BP has been told to pay $4.5 billion (£2.8 billion) in relation to the Deepwater Horizon oil spill in 2010 – the largest criminal fine in US history.

More than 20m gallons of oil – equivalent to 4.9m barrels – spilled into the Gulf of Mexico following an explosion at the rig just over two-and-a-half years ago.

Shares in the company swiftly plummeted, and chief executive Tony Hayward resigned from his position as a result. The chair of the company’s safety committee, Sir William Castell, remained in his job for two years afterwards, only retiring in April this year.

Eleven workers died in the blast, and a pair of BP employees have now been prosecuted for manslaughter.

The penalties imposed on the oil firm by the US Department of Justice (DoJ) includes a $1.26 billion fine, and BP has also been ordered to pay $2.4 billion to the National Fish and Wildlife Foundation – after the impact of the disaster caused devastation within the region’s marine life.

The question is; are the various penalties reasonable for an incident that is widely regarded as the worst environmental disaster in history? We don’t think so.

In actual fact, it’s likely that BP’s 2012 profits will be even higher. Its operating income took a significant hit in the ensuing months after the disaster, but has continued to pick up ever since.

Reacting to news of the fine, Greenpeace senior investigator Mark Flogel claimed it wasn’t sufficient punishment for one of the largest corporations on the planet.

“This fine amounts to a rounding error for a corporation the size of BP”, he said.

“It is far less than Shell Oil has already spent in the Arctic without yet commencing serious operations.

“Nothing in this proposed settlement gives any oil company incentive to be more careful in future operations.”

The relatively meagre criminal fine imposed on BP makes up only a fraction of its yearly profits. It will plead guilty to 14 criminal charges relating to the Gulf of Mexico disaster, but in the grand scheme of things, it has got away lightly.

A penalty amounting to $4.5 billion might be seen as adequate. But given its major role in arguably the worst environmental disaster in human history, the sum is frankly offensive.