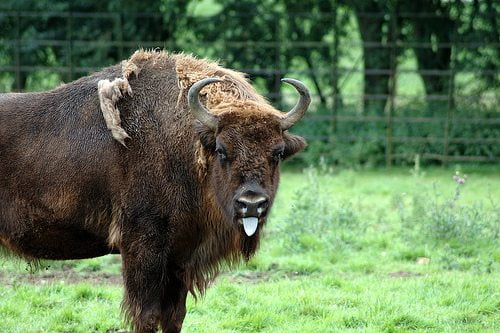 Seventeen bison, Europe’s largest wild mammals, have been released into the wild in Romania, more than 200 years after being driven out the region by poachers. Conservationists are calling it the largest reintroduction of its kind.

The animals – from a species even more threatened than the black rhino – arrived in their new homes last Saturday near Armenis in the Tarcu Mountains. They had travelled from European zoological parks where they had been bred.

The European bison disappeared from the wild in 1927 after having been hunted to near-extinction. Some were then bred and released in the wild, with around 3,200 individuals roaming throughout Europe.

Conservationists, politicians and citizens assisted in the release of the animals in Romania, where it is hoped that their numbers could rise to 500 over the next decade.

Frans Schepers, managing director of Rewilding Europe, which co-ordinated the release with the WWF, said, “This initiative shows that there are huge opportunities for wildlife comeback in Europe.

“It is heart-warming to see how the community of Armenis has embraced the coming of this wonderful animal into their area.”

Adrian Hagatis, team leader of the Southern Carpathians rewilding team, added, “The bison is part of our Romanian cultural heritage. It appears on coats-of-arms, in our legends and in many historical place names, even on beer labels. It is a species that went extinct in Romania over 250 years ago, but it has never quite disappeared from our minds and souls”.

Bison can have crucial contributions to local ecosystems, through grazing and browsing, and can help bring back other species, such as large carnivores.

The Romanian Carpathians were identified as the ideal habitat for the animals to thrive. Anne Juganaru, the country’s secretary of state for the environment and climate change, said, “It’s wonderful that we have this treasure of nature. But we have a dilemma: we have to maintain the balance between developing the economy and looking after protected areas. It’s not so easy to have this balance.”