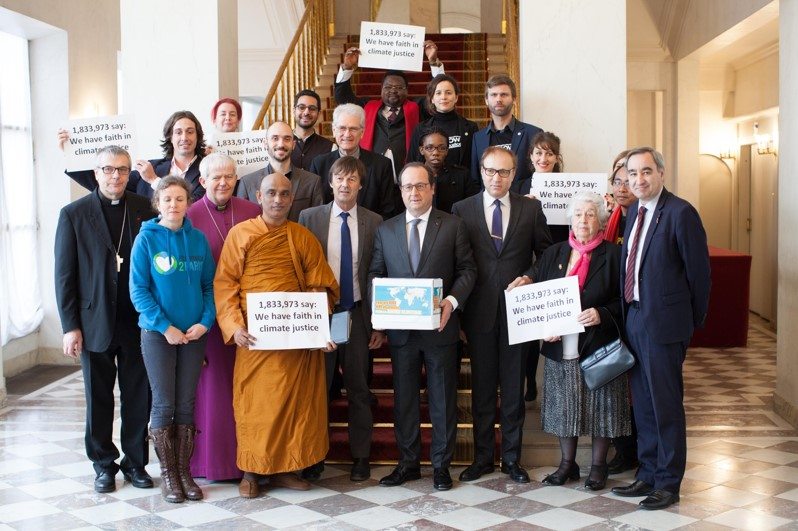 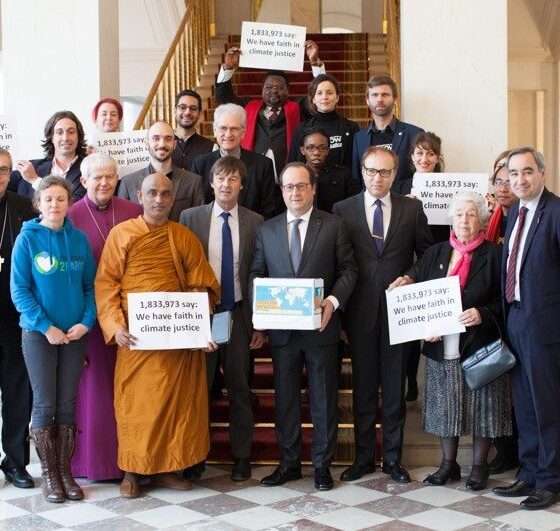 The Bishop of Salisbury, who is the Church of England’s lead on the environment, joined representatives of Christian Aid, ACT Alliance and other faith groups to present a collection of climate justice petitions to the President of France, Francois Hollande, today.

The result of a joint global effort from faith networks, the petitions were signed by 1,833,973 people calling for a fair, ambitious and binding deal at the UN climate summit. They were delivered to Mr Hollande at a ceremony at his presidential palace in Paris.

Addressing the group, the President praised the assembled faith leaders and campaigners from across the world: they included representatives of the Pan African Climate Justice Alliance, a Christian Aid partner, and the Philippines’ leading climate activist Yeb Saño.

The President told them: “Through the petitions, through the walks and pilgrimages, you have committed to defend life. It is necessary that all citizens engage and mobilise, like you have done …Your example has paved the way. I hope these pilgrimages and petitions will have as much influence as possible, while we’re still negotiating the [Paris] agreement.”

Mr Hollande reminded his guests that the primary role of negotiators at the climate summit was to “deal with the future of the planet.” He told them: “We must protect our planet. It is a responsibility that we can’t walk away from… Your message, your petitions, must be heard, and this voice you’re bringing, must be listened to.”

Speaking in his capacity as Climate Ambassador for ACT Alliance, Bishop of Salisbury the Rt Rev Nicholas Holtam told the President: “People of all faiths urge all parties to agree on a Paris deal applicable to all. Following the acts of terrorism in this city we want the world to act together, in care of our common home.

“For it to be ambitious, the agreement must include a long-term goal drastically cutting the world’s carbon footprint and making the transition to clean energy … It must also have a tool to review and increase countries’ contributions, to review and increase ambitions as gaps arise. When they go home, governments must actually start to deliver a low-carbon future.”

Bishop Nicholas saw first-hand the impact of climate change when he visited Malawi with Christian Aid earlier this year. Reflecting on the presidential event, said: “To hand in a petition with more than 1.8 million signatures from all over the world was really moving. It was a powerful thing. The message is simple – this is about our common home and we need to act together. This is not the end. This is the beginning of the journey and now we have to work hard in order to make this deal effective.”

Christian Aid’s International Advocacy Adviser Mariana Paoli, who attended the event, added: “Thousands of British voices were part of this call for climate justice: we are proud to join forces with so many campaigners worldwide. Faiths are united in standing in solidarity with the poorest and most vulnerable communities on the front line of the climate crisis. They have the least to contribute to climate change, yet are the most affected. This is an injustice. We’re made our message clear and we’ll continue to bang the drums for climate justice.”

At the event Yeb Saño, leader of the People’s Pilgrimage, addressed Mr Hollande. He said: “As a way to express faith communities’ deep sense of urgency regarding the climate crisis, we embarked on pilgrimages from all over the world … spreading hope for the future of humanity and hope for COP21, carrying the message of climate justice and our solidarity as one human family. Altogether we journeyed the distance of close to 300,000km.”

Also present during the handover ceremony was UK pilgrim Judith Tooth, who attends St Henry Morse Catholic Church in Diss, Norfolk. She walked 200 miles from London to France on the ‘Pilgrimage2Paris’ organised by Christian Aid, Tearfund, CAFOD and the Church of England – four organisations that were part of the global petition campaign.

Commenting afterwards, Mrs Tooth said: “I think from what the President said, he seemed moved by the efforts that we as pilgrims had gone to. Knowing that what we did has reached his ears and hopefully moved his heart, I feel very pleased. It was an honour to be here representing all those who walked on the ‘Pilgrimage2Paris’.”

Speakers at the event included representatives from OurVoices, Religions for Peace and the Global Catholic Climate Movement, who together with ACT Alliance led the global petition campaign. Guests also included members of We Have Faith, the Lutheran World Federation, and the Bhumi Project at the Oxford Centre for Hindu Studies.

The collection of petitions were first presented in northern Paris on November 28 to UNFCCC Executive Secretary Christiana Figueres and to the French President’s Special Envoy for the Protection of the Planet, Nicolas Hulot. Mr Hulot helped to host today’s event.