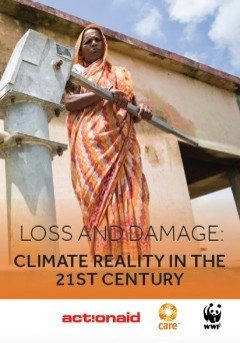 Three major civil society groups demand that the UN climate talks follow through on leaders’ calls for action to help the world’s most vulnerable people. This call follows the Climate Vulnerable Forum’s Declaration to upscale national climate action and a series of statements from richer countries at COP21 promising to help populations already suffering the effects of climate change.

As the negotiations bed down to the detail the groups warn countries must now commit to a deal which properly addresses the unavoidable devastation and loss of lives and livelihoods.

ActionAid, CARE and WWF have released a new report, Climate Reality in the 21st Century, in Paris. The report says that current plans to mitigate and adapt to climate change (a more prominent focus of the climate negotiations) are insufficient, making it more and more difficult for vulnerable communities and ecosystems to adapt. This will lead to unavoidable devastation and loss of lives and livelihoods, referred to as ‘loss and damage’, the report says.

The authors argue that a new global climate deal must address ‘loss and damage’ if the world is to help vulnerable communities and fragile ecosystems that are facing the brunt of increasing climate impacts.