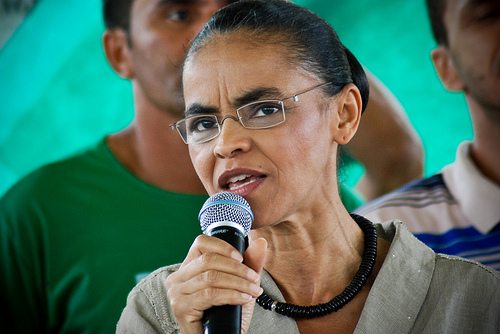 Silva, who was set to run as Campos’ vice-president, is a popular figure in Brazil. She gained nearly 20% of the vote when she ran as the Green Party’s presidential candidate in 2010.

Silva will now run against president Dilma Rousseff in October’s election. Rousseff’s popularity fell slightly after the country’s elimination from the World Cup – on which Brazil spent a considerable amount of public money.

Silva has previously had a proposal to register her movement Rede Sustentabilidade (The Sustainability Network) as a political party refused, before opting to run alongside Campos.

Guilherme da Nobrega, the chief economist at the brokerage firm Guide Investimentos, told Bloomberg, “There’s still a lot of doubt regarding Silva’s government program and views, but investors are focusing now on the fact that there are less chances of Rousseff winning.”

Silva comes from a modest rubber tapping family and was environment minister under president Luiz Inacio Lula da Silva, but later resigned when another politician was chosen to coordinate an Amazon sustainable development initiative instead of her.

A committed environmentalist and evangelical, Silva was a colleague of Chico Mendez, the union leader and conservationist who was killed by a rancher while fighting to protect the Amazon from deforestation.

She called for stricter regulation over the Belo Monte hydroelectric dam and was named one of Champions for the Earth by the UN environment programme (UNEP) in 2007.