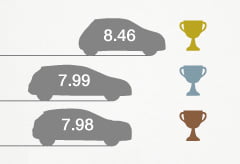 Research reveals that Europe is well on course to reach its target of 130g/km by 2015, with a number of brands hitting the mark early. 30% of new cars are now classed as ‘low carbon’.

Research reveals that Europe is well on course to reach its target of 130g/km by 2015, with a number of brands hitting the mark early. 30% of new cars are now classed as ‘low carbon’.

Gareth Hession, vice president for research at JATO said, “Manufacturers have a need to meet emissions targets as well as to sell their larger, more profitable vehicles. With three years to go to meet the 2015 targets there is clearly a challenge for them in achieving this balancing act.

“Manufacturers active in large and performance car segments continue to come under pressure to do more to reduce emissions. However, we can’t forget the progress that’s been made, such as Ferrari, which has already reduced its average emissions by more than 25% since 2007.”

The biggest overall improvement was from Lexus, whose 28% reduction has been accredited to the introduction of a new smaller hybrid model.

Looking at the country stats, Portugal comes out top with the lowest average emission of 122.7g/km, down 4.6% from 2010. A further six countries (Netherlands, Denmark, Belgium, France, Ireland and Italy) have also achieved emissions of below 130 g/km well before the 2015 deadline. The most improved country is Greece who just missed out on the target but who saw a 9.9% reduction.

At the other end of the list is Switzerland—the only country on the list to have average emissions of over 150 g/km. Germany and Slovakia are also lounging at the bottom of the table. The UK has seen a 6% decrease in the past year, but carbon emissions sit at a very average 138g/km, so still work to do.

Walking or cycling instead of jumping in the car is a sure-fire way of reducing your own carbon emissions even if you do drive a Fiat. You could also consider offsetting your carbon if you need to travel by air – it’s cheaper than you think. Find out more here.

Revenge of the electric car