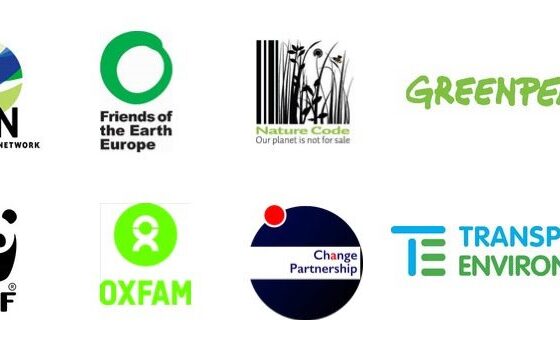 EU: put your weight behind renewables

Today, outside the meeting of Europe’s Environment Ministers discussing the EU’s negotiating position for global climate talks in Paris in December, climate groups staged a symbolic ‘tug-of-war’ between polluting fossil fuels and renewable energy . They called for EU governments to join the side of citizens and build a 100% renewable future.

Today’s meeting is expected to reconfirm the EU’s existing emission reduction targets as its pledge for climate action at the Paris talks. The EU has committed to cut greenhouse gas emissions by at least 40% by 2030. However, this level of cuts does not represent the EU’s fair share of the global effort to limit global warming to well below 2°C and avoid the worst impacts of climate change.

Wendel Trio, director of Climate Action Network Europe, said: “We call European leaders to ratchet up Europe’s climate targets, so that they reflect the urgency of a shift to a fully renewable energy system. European leaders have to make clear what they will bring to the negotiating table in Paris, in terms of Europe’s ambitions to reduce emissions before and after 2020 and financial support for climate action in developing countries. We expect the EU to support the call from poorest countries for a full decarbonization of our economy by the middle of this century. The EU must pave the way for an agreement which will speed up the phase out of fossil fuels.”

Climate groups believe Europe has the potential and the responsibility to do more to speed-up the energy transition, and they want the EU to increase its efforts to tackle climate change for the benefit of the climate and citizens across the world. They say that the Paris summit can help end reliance on fossil fuels and reshape the energy system.

World governments are expected to reach a new international climate change agreement at the United Nations climate talks in Paris in December.