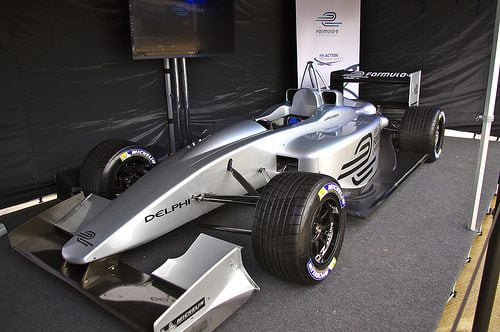 The new base will be home to the racing teams, office staff, warehouse workers and engineers working on the development of a new fully electric race car: the Spark-Renault SRT_01E.

The series will begin showcasing its cars, which are capable of speeds in excess of 225kmh, in Delhi on Friday. The first race of the series will take place in Beijing in September, with further races taking place in the hearts of some of the world’s biggest cities, including London, Miami and Rio de Janeiro.

Formula E chief executive Alejandro Agag said, “We looked at a number of locations around Europe but the British motorsport industry is regarded as the best in the world so it was an easy decision for us to be based in the UK and our new facilities at Donington Park provide the perfect central location for operating the FIA Formula E Championship.

“Being in the ‘Motorsport Valley’ also means we can take advantage of the technology and skills all around us, as we have already done through McLaren and Williams.”

He added that the fact Donington was within a “stone’s throw” of East Midlands airport, their commitment to cutting carbon emissions will be further strengthened.

“With investment from the government’s Growing Places Fund – secured through the Leicestershire Local Enterprise Partnership – Formula E’s new facilities will further promote Britain as a leading innovator in developing technologies for energy-efficient cars. Motorsport is now one of the key growth sectors, and a great British success story.”