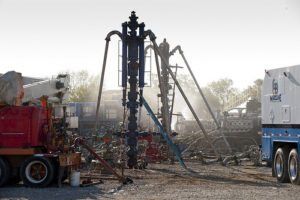 Frack Nowhere: US Gas Fracked At The Expense Of Communities

On Tuesday 27th September, ethane from US fracking will arrive in Scotland for the first time. Campaigners from both continents attacked bosses at INEOS for their financial gain from the destructive shale gas extraction in Pennsylvania.

Almost 10,000 gas wells have been drilled in Pennsylvania, with a devastating effect on local communities and the environment. One of the companies supplying INEOS with ethane from the Marcellus shale, Range Resources, has been fined millions of dollars for environmental violations and is implicated in a gagging order which involves 2 children. [2]

INEOS benefitted from millions of pounds of public money in grant and loan funding to help build a storage tank for the fracked ethane at Grangemouth. The chemicals corporation also want to frack for shale gas in the central belt of Scotland and large parts of Northern England. [3]

Ron Gulla, a former resident of Hickory, Pennsylvania who signed a lease for fracking on his land in 2002 said:

“I have witnessed first hand how the fracking industry has brought permanent damage across the Pennsylvania region, polluted our air, land and water and is destroying our livelihoods. Those living near drilling, infrastructure or waste sites have suffered water contamination, spills, wastewater dumping and gas leaks, as well as multiple health impacts.

My property and life have been destroyed by this industry.

“I don’t know how the harm the fracking industry has caused can ever be corrected or how these injured places will get back their clean water. We must never lose sight of the fact that water is more important than gas.

“The 9900 unconventional wells already in the ground in Pennsylvania represent less than a tenth of the number the industry would like to drill. The impacts to the environment, human and animal health, safety, property value, and quality of life have been profound, yet our state government has chosen to put the interests of the industry over those of the people at every turn.

“Every bad idea, from wells placed next to public schools to radioactive drilling waste being used as a road paving material to the construction of ethane crackers, gets its day in the sun. By the time the industry has finished with Pennsylvania, the state will be unrecognisable. Much of what we are losing is irreplaceable, but even that which can be replaced will be the taxpayer’s burden to bear.”

“It is completely unacceptable to attempt to prop up INEOS’s petrochemicals plants on the back of human suffering and environmental destruction across the Atlantic. The fact that Scottish public money is tied up in this project is disgraceful.

“Setting aside the devastating local impacts of fracking, the climate consequences of extracting yet more fossil fuels are utterly disastrous. If Jim Ratcliffe was really concerned about the future of the Grangemouth plant and its workers he would be planning for its transition to a low carbon model.

“We urge the Scottish Government to act swiftly to ban fracking and start planning seriously for a fair transition to a low carbon economy across all sectors. Fracking should not happen here in Scotland, or anywhere.”

Billionaire INEOS owner Jim Ratcliffe has made clear the company’s plans to become the biggest frackers in the UK. INEOS owns or has a majority stake in all onshore oil and gas licenses in the central belt of Scotland, covering an area of over 700km2, and has over 4,000km2 of license area across the whole of the UK. It was revealed recently that the company’s plans to apply for 30 fracking planning permissions in England this year have suffered a setback, with revised plans to submit 5 applications. The moratorium in Scotland prevents INEOS from fracking in its central belt licenses. The company has called the Scottish Government’s moratorium ‘absurd’. [4]

Range Resources, one of the companies supplying INEOS with ethane from fracked Marcellus shale gas has a chequered recent history. The company is implicated in gagging orders against children in Pennsylvania (2013); was pursued for a record $8.9 million fine for failing to fix a gas well that polluted groundwater and a stream in Lycoming County, Pennsylvania (2015); was fined $4.15 million for violations at six wastewater impoundments in Washington County, Pennsylvania (2014); has suggested it avoids drilling in rich neighbourhoods (2016); and is alleged to have doctored water test results (2016). [2]