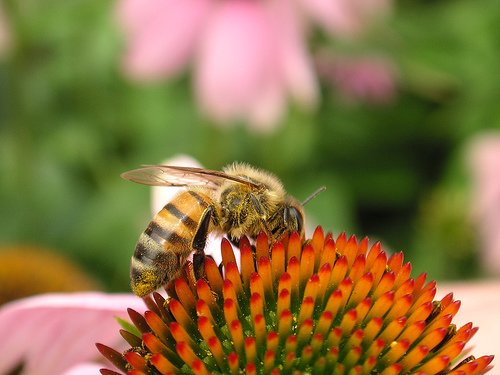 Garden centres to remove insecticides harmful to bees from shelves

Four garden centre retailers that own 60 stores across the UK have pledged to remove a harmful stream of insecticide that has been linked to the declining bee population.

Notcutts, Hillier, Squires and Blue Diamond follow the lead of hardware giants Homebase, B&Q and Wickes in taking the neonicotinoid chemicals, which scientists say affect the bees’ central nervous systems, off their shelves.

Campaign group Friends of the Earth last month took a list of 64,000 signatures to Downing Street, urging David Cameron to draw up a national bee action plan in order to halt the decline.

“It’s great to see garden centres across the UK heeding the warning from European safety experts and pulling pesticide products linked to bee decline from their shelves”, said Friends of the Earth’s head of campaigns Andrew Pendleton.

“The approach of leading retailers stands in stark contrast to the government’s reluctance to back European efforts to safeguard bees from pesticides.

“With bee numbers plummeting, environment secretary Owen Paterson must take urgent action to safeguard these crucial pollinators by backing a ban and introducing a bee action plan to tackle all the threats they face.”

A group of MPs voiced their concerns about the falling number of bees in the UK in December, following evidence from the environmental audit committee that linked common insecticides to the decline.

Then, last month, the European Commission urged EU countries to ban the use of the neonicotinoid insecticides in question, following a European Food Agency report outlined their harmful effects.