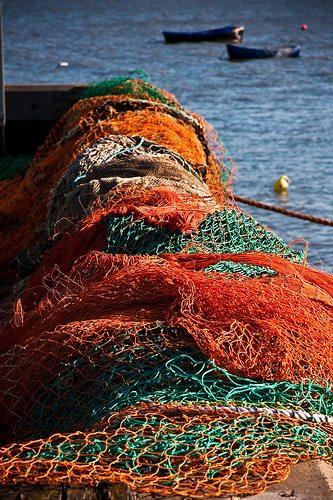 An international initiative aiming to stop ‘ghost fishing’ has celebrated its first success after retrieving 20 tonnes of discarded fishing nets from the bottom of the North Sea.

The Healthy Seas project, an initiative founded by Aquafil, the ECNC Group and Star Sock, aims to remove waste, in particular ghost fishing nets and other marine litter, from the seas and recycling them into textile products.

Ghost fishing occurs when a fishing net breaks free from a fisherman’s boat, and independently drifts through the water catching fish, turtles, and other forms of aquatic life as it goes along.

According to a joint report by FAO and UNEP, there are approximately 640,000 tonnes of abandoned fishing nets in the oceans, accounting for a tenth of all marine litter.

The first phase of the Healthy Seas project has concentrated on the North Sea, off the coasts of the Netherlands and Belgium. Since this summer, teams of scuba divers have collected fishing nets to be transported to Slovenia on Tuesday, where they will be regenerated into new ECONYL yarns.

In July, research by the universities of Aberdeen, De Montfort, Aberystwyth and Birmingham City found that protecting marine habitats around the UK will bring about significant economic benefits, as well as preserving wildlife and having a positive impact on local wellbeing.

The report said that a proposed network of 127 marine conservation zones (MCZs) around the UK, which the Department for Environment, Food and Rural Affairs (Defra) has so far failed to implement, will give both economic and environmental boosts.