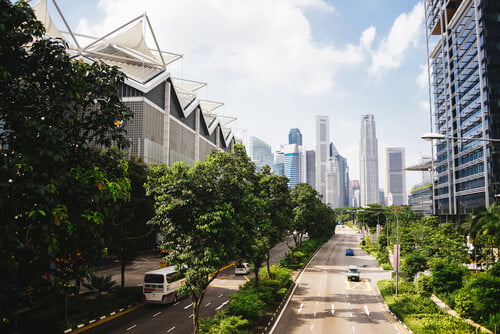 5 Greenest Cities In The US (And The Least Green Cities)

This may be good for the economy, but it is terrible for the environment. When there are a lot of factories, air pollution is usually a major concern. But, the United States government seems to know how to deal with it. Many communities are becoming better at handling it as well.

Of course, it is still a good idea to spend time in areas where there is less pollution and a greater focus on sustainable energy. There are some places in the US that are much greener than you would’ve expected. Here are some green cities you should check out if traveling to the US.

We’ll tell you right away – four out of these five cities are located in California. The reason is that the state’s politics are very green. For example, they want to ensure that all the electricity in this state comes from renewable sources. And this is something that’s planned to be achieved before the year 2045.

One of the Californian cities that is leading the way is San Jose. Situated in the Silicon Valley, the city is home to a number of big-name IT companies, some of which are actively involved in making the world a greener place.

Here’s another Californian city, but unlike San Jose, Irvine is located in the southern part of the state. Actually, the city is tucked in between Old Saddleback Mountain and the Pacific Ocean. The lovely surroundings were the reason why Irvine founders decided on this location when they set the foundation to this master-planned city back in 1960s.

And if you plan to pay this city a visit, its greenness doesn’t have to be your only motive. There are plenty of reasons to do so, including the fact that Irvine is a home to several renowned universities, including the University of California, Irvine.

The capital of the United States is among its cleanest and most eco-friendly cities. This may come as a surprise to some. This is where you’ll find a number of politicians like Senator Jim Inhofe who still claim that the global warming is a hoax.

We’re back in California again with the no.2 greenest city in the United States. You’re probably not surprised that the city in question is San Francisco. Currently holding the title of the most-livable city in the United States, among environmentalists San Francisco is famous for its parks. Right now, there are more than 220 of them. San Francisco also passed a law a few years ago, which states that all new businesses must have solar cells on their property. The question is whether solar cells will be effective at reducing our environmental footprint, because they aren’t as efficient as people would like to believe.

But, even in the busy streets of Downtown San Francisco, the air is surprisingly pure. The reason? A large number of cars on those streets are electrically powered.

Beating San Francisco by a tiny mark, San Diego is the greenest city in the United States in 2018. There are many, many reasons why this is the case, starting with the fact that greenhouse gas emissions are as low as it gets. Also, the share of electricity created from renewable sources is also at a very high level. Finally, there are also many job opportunities in San Diego for those who want to be involved in environmentalism.

And Which Cities are Least Green?

Dubbed the capital of the American South, Baton Rouge in Louisiana is the least-green city in the country. It’s easy to see why this is the case if you take a look at some of the biggest employers in the city. Oil refineries, chemical plants, and many other large factories are to be seen around the city. And it’s a similar case in other cities in this part of the USA, which all need to get much, much greener very soon.

There are a lot of great places to visit if you are concerned about green living. You will want to choose the right places for your next travel destination or a place to live. As you can see, California should be at the top of your list.

Mumbai-based ex-engineer. Traveler. Photographer. Lover of Bourbon & Astrophysics. Curiosity and a love for travel make me determined to explore the world’s most extreme and beautiful environments. You can find him on Touristerlife.com