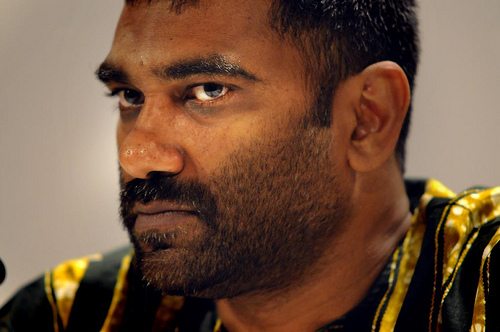 The head of Greenpeace International has offered to meet Russian president Vladimir Putin in order to discuss the release of the ‘Greenpeace 30’ currently being held by the Russian government on charges of piracy.

Executive director Kumi Naidoo wrote to Putin after two activists and one journalist were refused bail on Tuesday, with the further 27 cases requesting bail to be heard later this week

Russian security forces arrested 28 Greenpeace International activists, a freelance photographer and a freelance videographer aboard the Greenpeace ship Arctic Sunrise 20 days ago. Their detention followed a protest at the Gazprom Arctic oil platform Prirazlomnaya in international waters, after two of the activists attempted to board the rig.

All 30 have been charged with piracy, an accusation which carries a potential 15-year sentence in Russia, despite Putin saying that the activists were clearly “not pirates”, and Vladimir Lukin, the president’s human rights ombudsman, arguing there was “absolutely no basis” for the piracy charges.

Greenpeace says that the conditions in which the 30 men and women have been detained have on occasions violated their rights, adding that their lawyers are currently filing complaints.

In a letter delivered on Wednesday to the Russian embassy in the Hague, Naidoo offered to move his life to Russia for the duration of the affair, and act as a guarantor for the good conduct of the activists if they are released on bail.

“They, we, Greenpeace, do not believe ourselves to be above the law. We are willing to face the consequences of what we did, as long as those consequences are within a nation’s criminal code as any reasonable person understands that code to be”, he wrote.

“Were our friends to be released on bail, I offer myself as security against the promise that the 28 Greenpeace International activists will answer for their peaceful protest according to the criminal code of Russia.The law, as we both know, does not apply the offence of piracy to the actions of peaceful protesters.”

Naidoo also asked for Putin to use his position to request that the excessive charges of piracy are dropped, and the two independent journalists are immediately freed.

The activists were protesting against drilling for oil in the Arctic. Ben Ayliffe, head of Greenpeace International’s Arctic oil campaign, said, “Drilling for oil here in the Arctic is a grave environmental risk that must be stopped and this is why Greenpeace International came here, taking peaceful action to defend the environment on behalf of the millions of people around the world who are opposed to drilling operations.”

In Naidoo’s letter, he tells Putin, “One day after the arrest of the activists, the United Nations issued its latest warning on the threat posed to all of us, to your nation, to mine, to the world, by climate change.

“The findings of the report, authored by our greatest scientific minds, imply that we cannot afford to prospect for and burn new sources of fossil fuels. That is why the protesters felt compelled to make the stand they did, a stand that was both peaceful and respectful of your nation.”

Making Working at Home for an Eco-Friendly Employer More Enjoyable