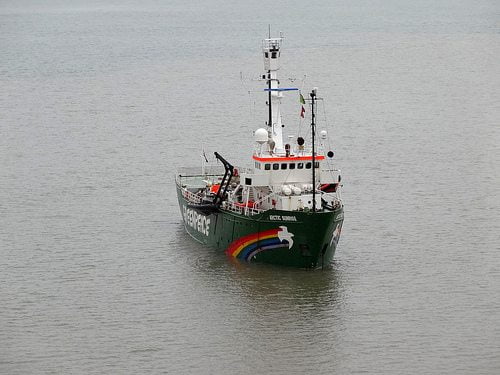 Eleven Nobel peace prize winners have written to Russian president Vladimir Putin, asking him to drop charges against the 28 Greenpeace activists and two journalists currently being held in the country on piracy charges.

The peace laureates, including Archbishop Desmond Tutu and Northern Irish peace campaigner Betty Williams, urge that any charges brought “are consistent with international and Russian law.”

Russian security forces arrested 28 Greenpeace International activists and two journalists aboard the campaign group’s ship Arctic Sunrise. Their detention followed a protest at the Gazprom Arctic oil platform Prirazlomnaya in international waters, after two of the activists attempted to board the rig.

All 30 have been charged with piracy, an accusation which carries a maximum 15-year sentence in Russia, despite Putin saying that the activists were clearly “not pirates”, and Vladimir Lukin, Putin’s human rights ombudsman arguing there was “absolutely no basis” for the piracy charges.

Russian investigators have also claimed that they found ‘narcotic substances’ aboard the board, accusations that Greenpeace has rejected.

On Wednesday, German chancellor Angela Merkel has added to the pressure on Putin, after urging the ‘Arctic 30’ be set free.

Kumi Naidoo, the executive director of Greenpeace International has also submitted a letter to Putin, offering to meet in person to discuss the release of the accused.

Naidoo has also offered to move his life to Russia for the duration of the affair, and act as a guarantor for the good conduct of the activists if they are released on bail.

The protest had been against Russia’s intentions of drilling for oil in the Arctic. The Prirazlomnaya rig will be Russia’s first offshore drilling project in the Arctic. It is due to become operational in early 2014.

The peace laureates warn of the potential impacts of a spill in the Arctic, describing the region as a “precious treasure of humanity.” The letter adds that they all support efforts to protect the High North from oil exploration and climate change.