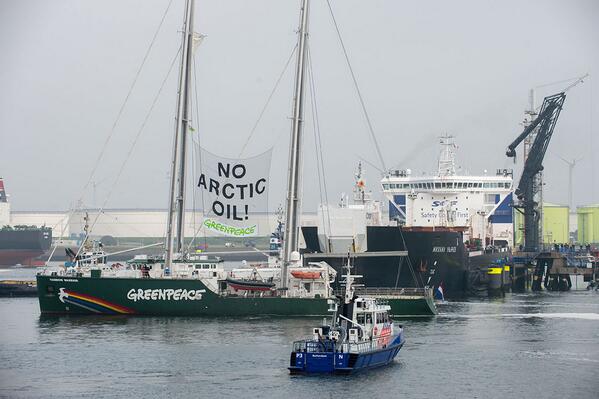 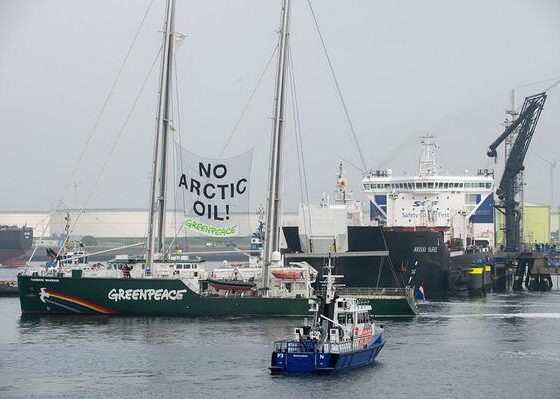 Dutch police have arrested the captain of a Greenpeace vessel, after activists tried to stop a Russian tanker delivering oil controversially drilled from the Arctic to a port in Rotterdam.

The Greenpeace ship Rainbow Warrior blocked the Mikhail Ulyanov tanker as it attempted to moor in the Dutch city’s harbour early on Thursday morning.

Police quickly boarded the vessel and arrested around 30 activists, but were unable to move the Warrior for around two hours. By this time, activists on smaller vessels had surrounded the tanker – some managing to paint the message “No Arctic Oil” onto its hull.

Police told the news agency AFP that several protesters also climbed a fence to try to stop the ship from docking.

When the authorities managed to moor the boat in Rotterdam, activists were told captain Peter Willcox was still under arrest while the rest of them are free, according to Greenpeace UK’s Twitter feed.

The tanker is carrying oil from Gazprom’s Prirazlomanaya platform located in the Arctic Pechora Sea, the site of a Greenpeace protest last year that saw 28 activists and two journalists jailed by the Russian authorities for 100 days.

Of the so-called ‘Arctic 30’, seven were involved in today’s protest, including Willcox.

Dutch activist Faiza Oulahsen, who was also one of those imprisoned, said, “Thirty of us went to prison for shining a light on this dangerous Arctic oil, and we refuse to be intimidated.

“This tanker is the first sign of a reckless new push to exploit the Arctic, a place of incredible beauty, which is melting before our eyes. I stand with five million others against those who put short term profit above the common interests of humanity.”

Environmental campaigners hold many concerns over the safety of Arctic oil drilling. Should an oil spill or marine disaster occur in such remote regions experts warn that response teams would have little hope of reaching the scene before considerable damage is done to the pristine Arctic environment.

Conservative MP and environmentalist journalist Zac Goldsmith is among those who say the pursuit for Arctic oil is “profoundly reckless”. He argues that oil companies are continuing to ignore the risk of oil spill despite warnings from recent history.

The infamous Exxon Valdez oil spill of 1989 occurred near US Arctic waters, but in conditions much more hospitable for response teams. An estimated 250,000 sea birds, 2,800 sea otters, 300 harbour seals, 22 killer whales and thousands of fish were still killed.

The opening up of the Arctic region to oil exploitation also runs parallel to global commitments to decarbonisation, as scientists warn the use of fossil fuels must be drastically cut to avoid the worst impacts of climate change.