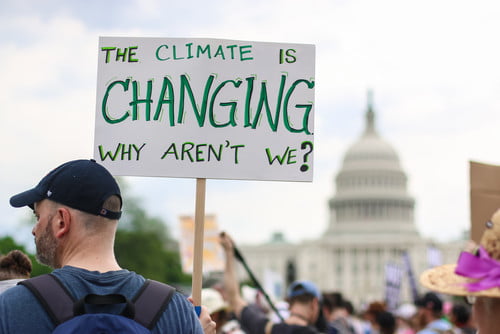 Have Environmentalists Gone Too Far In Efforts To Stop Climate Change?

The world we live in presents us with the number of facilities and products that empower productivity and common welfare. People got used to the range of opportunities and options in every sphere that results in their difficulty and inability to accept the need for limited consumption and more reasonable use. Still, in this era of general advancement and improvement, society continues facing the environmental crisis that only aggravates and tends to worsen the situation with global safety. It is obvious that the environmentalist movement carries on launching the projects to save the planet but the activities’ approaches and main objectives to stop climate change are perceived as contradictory and to some extent even more threatening. Our experts from WritingCheap made a research on the topic of real outcomes we may obtain while combating the climate change and attempting to view the environmentalists’ work as the only possible way out. Let’s see what the professionals found out and in what way the issue turns out to be critical for everybody.

The environmentalists view the global interventions in climate to be the best solution of all the environmental disasters. It is called climate engineering that comprises solar radiation management and greenhouse gas removal. In general, these approaches stand for the altering of the global climate that seems to be promising but at the same time may cost a lot for the whole planet (Pros and Cons of Climate Engineering to Combat Climate Change). The scientists and scholars claim that the three main proposals of geoengineering such as carbon dioxide air capture, obstructing the solar radiation with a space-based mirror and releasing reflective stratospheric aerosol particles into the upper atmosphere may all end in the irreversible consequences for humans and nature in general, as informs Miguel Barral. The fact is that the change of Earth’s climate may indeed involve some negative changes in natural balances while making some time bombs to kill everything alive.

The fact of environmentalists’ failure

Without a doubt, the environmentalist movement always struggled to perform in a way their actions and decisions reduce the damage, eliminate and prevent a new threat. In other words, the activities and professionals succeeded in raising the question of the ozone layer’s depletion and fighting the problem with acid rain. Specifically, their objective and well-thought approach was directed on the creation of benefits for the humans using the products which cause the troubles. Still, with the spread of environmentalism and their impact, the issue only aggravates because of the wrong interpretation of what should be done to tackle the challenge.

Alter the solution rather than habit and need

Individually, the sphere of food production is said by environmentalists to be the primary contributor to climate change due to the humans’ throw of products, their neglect of proper recycling. Still, if to view the question objectively, the emissions from food may be prevented by simply transforming the system itself. To be more precise, the improved transportation and refrigeration, the address of the consumer level in the prosperous countries may perfectly deal with the problem of emissions and pollution. As a result of such environmentalists’ positions, people are forced to change their daily diets, eating habits and needs that impact their health, well-being and even freedom of choice.

Moreover, such an environmentalist approach seems to call the individuals to forget their food cultures which define their national identity and value. The environmentalists believe that their project of ‘global diet’ would enable the positive transformation of the humans’ habits and thus stop climate change. Notably, the amount of meat or sugar allowed per week, the number of eggs and increased emphasis on vegetables would make people’s life unbearable if to consider the fact of diverse eating preferences and cultures developed over thousands of years.

Just stop flying and riding at all!

Traveling is something that makes us alive regarding the way we enrich our knowledge, get new experiences, emotions, and feelings while viewing a variety of cultures and traditions. It is impossible to travel around the world without taking a flight, getting a train or a car. Still, environmentalists see the question differently remaining too radical and stating people should stop flying but appeal only to public transport or cycling what limits the humans in their transportation needs (The Environment Is too Important to Leave to Environmentalists). Here, one may also observe the environmentalists’ wrong objectives when instead of supporting the scientific evolution with the electric vehicles their principles reduce the quality of humans’ life.

To sum up, the question of environmental issues and disasters is urgent today and requires immediate actions to not only decrease the existing negative effects but to prevent the new global damage. The environmentalists indeed try to improve the situation while offering the solutions which seemed to be the best for all. Still, their strategies fail to be successful and to the contrary present the risks and limitations. The most important here is for the environmentalists to stop being too idealistic in their decisions and projects while every person must stay active and interested to be competent enough in the best options to improve one’s living conditions.