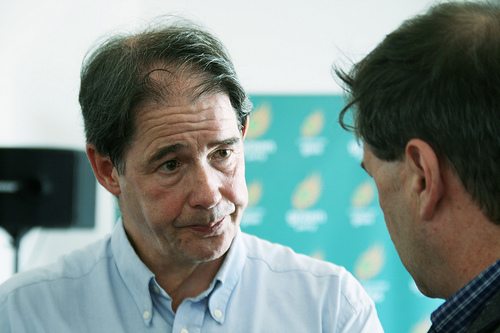 The European Union (EU) has led the way on environmental issues, consumer protection and workers’ rights, but “remains mired in the last century” and needs radical reform, the prominent environmentalist Jonathon Porritt has said.

In an article for the Guardian, Porritt – the founder of Forum for the Future and a former Green party chairman – says that the EU needs to “[speak] to the realities of the 21st century rather than the long-lost fantasies of the 20th century“.

These “realities”, he said, were climate change, income inequality and the prevalence of “neofascist” views on Europe and the union.

His calls came as Britain took to the polls for the local and European elections on Thursday May 22. The results of the latter were revealed on Sunday evening, with Nigel Farage’s Eurosceptic Ukip taking 27% of British votes – more than any other party.

The Green party, which Porritt chaired for six years until 1984, won an extra MEP in the south-west of England, taking its total to three overall. The result sees it leapfrog the Liberal Democrats into fourth.

On Ukip’s victory, Farage said, “The penny’s really dropped that as members of this union we cannot run our own country and crucially, we cannot control our own borders.”

Porritt wrote that the EU’s leadership on certain issues, such as climate change, has “made us all complacent” about the advantages of being part of Europe. Successfully tackling climate change, he said, requires a decoupling of “the pursuit of prosperity from carbon-intensive economic growth“.

He added, “The new European parliamentarians will need to articulate this non-negotiable physical reality with passion and a compelling upside story, framed around energy security (reducing both price volatility and dependence on imported gas); new skills (through local and community renewable energy schemes); new jobs; and an end to fuel poverty (particularly through comprehensive housing retrofits).”

Porritt went on to call for an EU-wide carbon tax, a financial transaction tax and what he called “green quantitative easing” – which would involve investment in energy infrastructure, creating much-needed jobs across the continent.

He concluded, “The EU has helped make many good things happen for its citizens over the past few decades, particularly on environmental issues, consumer protection and workers’ rights. But the commission has lost the plot because it remains mired in the last century. To rebuild confidence and trust we will have to hack back the bureaucracy to work towards a resilient, just and genuinely sustainable future.”