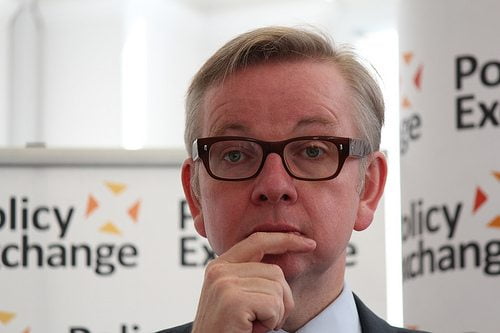 “Conservative instinct” is at the heart of environmental stewardship, the education secretary Michael Gove said in a speech at Westminster last week – the full text of which can be found here. Gove also answered some questions from the floor and his answers are below.

Planning policy and the environment [question and beginning of answer missing]

I think there are two things we need to bear in mind. First, we need to recognise that thanks to breakthroughs in technology, it’s easier to build in a sustainable way… [inaudible]. But I think it is important that we recognise that when communities grow, they should grow organically, and it’s important that communities should have a say in shaping their local neighbourhood plan so that, wherever possible, we build in a way that is sympathetic to that which already exists.

One of those people whom I think captures this best and understands it instinctively is someone who, while he is totally above party politics, is a natural conservative environmentalist. And that’s the Prince of Wales. He’s been very, very keen to ensure that people who live in the countryside can have access to affordable housing.

Peter Ainsworth, former Conservative MP: Why do you think it is that so many Tories think that the environment is a left-wing issue?

I think it’s partly because some aspects of the environmental debate have been captured by people who want to use the genuine dangers that the environment faces as a way of providing a new rationalise for greater state power and centralisation. I think it’s been the case that in the past, there have been people on the left who have been looking for a risk to identify and when they identify that risk, they say the only way to deal with it is more state power and more centralised state power.

I think conservatives whenever they’ve seen the left gathering around a cause which would lead to more centralised state power, have thought, “Oh well, if the left are colonising their territory, perhaps it’s not going to clear up.” And I think that’s been, as I hope you appreciate from what I say, a big mistake.

And I think it’s important that while we argue furiously about the means, and make clear that we believe that some of the means which are being proposed by people… [inaudiable] …that we are absolutely clear about the end, and the ends that you and I believe in are impeccably conservative and I think actually represent what the overwhelming majority of people in this country, indeed across the world, want to see, which is natural beauty respected and observed and enhanced, and investment in making sure that our children grow up in a world which is going to be safer and richer in every sense for them.

That’s what we think about instinctively when we’re thinking about economic policy, [and] when we’re thinking about education policy. It’s what should apply in environmental policy as well. Just as Zac [Goldsmith, Conservative MP] said, in areas that the left have said, “This is our policy” – they might have said it in childcare or education in the past – we’ve been energetic and said, “Actually no, we have practical solutions that meet the needs of the majority now.”

I think we should do that in the environment, and that means being hard-headed but also aware of values that go beyond simply the commercial.

Geoffrey Lean, the Telegraph: The thing you’re perhaps most identified with, rightly or wrongly, is a wish to lessen the teaching of climate change in schools. Could you give us your views?

One of the things that sometimes occurs in coalition politics is that the smaller party understandably seeks to draw attention to itself by saying, “We’re in favour of apple pie, cream and custard, and it’s the meanies in the bigger party that are trying to take it away.” Zac knows, because he was present at the creation, that the School Food Plan was something that I initiated.

Subsequently, for entirely understandable reasons, [people] have said, “Gove doesn’t want our children to have nutritious food.” If I had wanted that, I wouldn’t have asked Henry [Dimbleby] and John [Vincent] to conduct that report and I wouldn’t have engaged in the long and detailed discussions about how we could make it work with that.

In the same way with climate change, I think it’s important that children understand the science that underpins climate change, and that’s why it’s always in the curriculum that we’ve been drawing up, and I think it’s critically important – both in science and in geography – that the impact of changing climate on our physical environment, but also on economic and other facts in our lives, has to be appreciated.

I think it’s important, too, that we recognise that climate change has had an impact on societies in the past as well. I read – I haven’t finished it yet; it’s a fantastic book but very long – a book by a man called Geoffrey Parker, who’s a historian, which deals with climate change during the 17th century. It makes the point that climate change is something which you need to prepare for by having appropriate measures to mitigate, and that’s really important.

But it’s also the case, as we know and as George Osborne pointed out just last week, that man and his activities clearly have an influence on the climate, and in making sure we take appropriate steps to deal with it, we need to be guided by the science and we need to make sure that we’re hard headed but realistic.

Nicholas Watt, the Guardian: Just picking up on your answer to Peter’s question, Michael Liebrich has a very interesting chapter in this book in which he talks about the best way of promoting clean energy and renewables is not through massive regulation or massive subsidies. What I’m interested in is how do you think you can make that case, given that one of your ministerial colleagues gave that sort of view a rather negative view when he talked about getting rid of the “green crap” from energy bills?

I wasn’t in whichever room it may have been when that phrase was allegedly uttered. I’ve learnt that unless you’ve seen the evidence, it’s better not to offer a view about a phenomenon which remains deeply contested, as in who said what to whom at what time.

But one thing that I would say is again, in practical terms, if only more attention had been given to the work that Charles Hendry has done, that Greg [Barker] is doing, and that the team at DECC [the Department of Energy and Climate Change] have carried through. By definition, there are tough practical questions where good people can disagree about what the appropriate solution is.

But my own view is that Greg has very skilfully articulated the point, that human ingenuity being set a test and being invited to demonstrate entrepreneurialism, creativity… [inaudible] …in dealing with it is the best way to foster the sorts of technological breakthroughs that will enable us both to enjoy sustainable growth and to sustain natural beauty.

In almost any area of policy, I think it is far, far better to create structures which unleash human creativity and foster innovation, rather than seeking to level down those to regulators. That’s what I’ve found in education policy; it’s what Greg is proving in the energy policy as well.

Andy Atkins, Friends of the Earth: If you think that this space has been occupied by the left, particularly on climate change, is there anything you could do quickly [and] differently to show that the right and the centre can reoccupy it?

But beyond that, it’s not that it’s above my pay grade; beyond that it’s about my level of knowledge and technical expertise. I have a bias, which is towards as I said trusting people like Greg who I know are passionate about this issue, but also genuine free marketeers, because that ticks both my boxes. But when it comes to deciding exactly which specific policies one should implement, then I would draw back.

One of the things that Greg and I are doing – I shan’t announce it now – is an initiative which shows how DECC and the DfE [Department for Education] together can make a small but I hope helpful step in dealing with this problem in a practical way, and Greg will say more about that in due course.