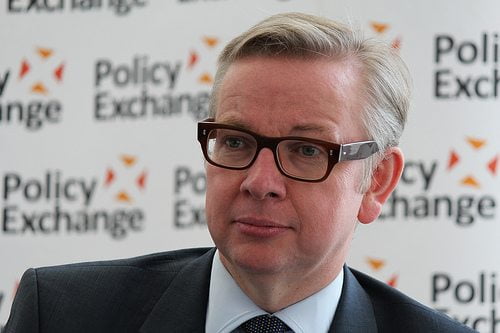 “Conservative instinct” is at the heart of environmental stewardship, the education secretary Michael Gove said in a speech at Westminster on Wednesday. Read the full text below.

I’d like to begin by saying a special word of thanks to Zac [Goldsmith, Conservative MP]. I knew Zac before he became a member of parliament, and I was one of a number of people who sought to persuade him that his formidable powers, his keen mind, but above all his high attachment to principles deserve to be put under country service in parliament. In doing so I think I may have ruined Zac’s life.

But I do know that the House of Commons and the people of Richmond have gained enormously. And I know one thing in particular: when Zac eventually accepted that perhaps he might dip his toe into parliamentary water, there were a number of constituencies that were beating a path to his door – many of them safe Conservative constituencies in beautiful parts of the country with very, very healthy majorities.

One of the other things which Zac scented about me is that he knew that I was one of those characters we call a ‘shy green’. We’re familiar with the concept of shy Tories – people who are naturally Conservative but don’t want to make a song and dance about it. One of the things that I’ve learnt throughout my life is that I’m an environmentalist but a lot of time I didn’t realise it.

I grew up in a part of the world, in Scotland, where natural beauty was part of my birth right. One of my greatest pleasures – for example, this weekend – is being able to travel back to the north-east of Scotland with my children to introduce them to the environment in which I grew up, and to give them an opportunity to enjoy the unparalleled beauty of that part of our country.

But I also grew up in Aberdeen with a father who was a fish merchant. His business depended on husbanding and preserving our stocks in the North Sea, and one of the reasons why I take the occasionally mildly sceptical view of the European Union that I do is that because I saw his livelihood – and the livelihood of many who depended on the husbanding of those stocks – affected by an approach towards our natural resources in the North Sea that was driven not by a proper desire to preserve, but by a bureaucratic approach which ultimately ended in impoverishing communities and depriving those seas of their natural richness.

One of the other reasons why I was a shy green is that one of my favourite subjects at school was English literature. And one of my favourite poets, Wordsworth, spoke to me as a teenager when he talked about the way in which nature refreshes the care of one’s spirit. And for all of us here, that’s true.

We all know that when we have that opportunity to be outdoors and to see natural beauty, we find that our own spirits are lifted and we recognise that we’re in the presence of a creation, Wordsworth believes, that renews ourselves from within. All of these things are part of me and I expect part of many of you, but one of the other things that’s part of all of you is being a conservative.

I think it’s important to pass onto the next generation an economy that’s sound and works rather than one that saddled by debt – which is why that the work that George [Osborne] has been leading the Treasury in order to repair our finances is, in the best sense of the word, a work of renewal and of nurture and reuse.

But we also want to pass onto the next generation the natural beauty that all of us have enjoyed – the diversity of creation that has flourished in these islands – and we wanted to make sure that this is properly valued and available to future generations in the way that it was been available to us.

Conservatives have, as the prime minister put it earlier in the House of Commons today, walked the walk without talking the talk. As Zac pointed out, Anthony Eden, Disraeli – Conservative prime ministers have been responsible for ground-breaking environmental legislation. Margaret Thatcher, the godmother, as it were, of modern environmentalism, was responsible for making clear, as Zac said, that we have a full repairing lease on this planet – not a freehold that allows us to do what we will.

That sentiment, I think, is at the heart of many of the things that we’ve done in this government, which is we haven’t celebrated or shouted about enough.

The work that Greg Barker has done at [the Department of Energy and Climate Change], to my mind, has harnessed not just a conservative respect for the environment, but a belief that it is through innovation and entrepreneurialism that we will unleash the technological change required in order to enhance our environment and to provide green jobs.

It has been the case that Caroline Spelman and Richard Benyon when they were at [the Department for Environment, Food and Rural Affairs] initiated the approach towards valuing the environment through the concept of natural capital that Owen [Paterson] and George Eustace have taken on, which ensures that we recognise the economic value of the beauty and the richness of our cultivated environment.

Zac was very generous about what we’ve done at the Department for Education. And one of the things that I just wanted to underline is that there is a big agenda in seeking to improve our education system and to change our schools. We want to get children to not only read and write, but also appreciate the value and the beauty of the environment around them.

That’s why we’ve change our science curriculum so that natural history is at its heart. That’s why the geography curriculum makes sure that people understand, map and spend time outdoors appreciate the natural environment.

That’s why also, as Zac said, we commissioned John Vincent and Henry Dimbleby from the Sustainable Restaurant Association to develop a school food challenge that made sure not just that all children have the chance to enjoy a nutritious meal in schools, but also that children appreciate where their food came from – the impact of the seasons and the vital importance of making sure that what we put on our plates is connected to the country in which we live and the world which we value.

All of these things come naturally to conservatives, because as this pamphlet makes clear, it’s conservative instinct – for example, over property rights – which safeguard the environment better than a bureaucratic or collectivist approach. It’s celebrating those people who live and work in the natural environment, like our farmers, which is central to making sure that the environment is stewarded totally – rather than always in the default mode, looking to bureaucrats and quangos to celebrate what is beautiful and right.

And above all, one of the reasons I’m so glad to be here is that, as many of you all know, the little platoons that start organisations, from the RSPB to the – in my constituency – Chobham Common Preservation Society, are natural conservatives. It seems to me that all those platoons there are part of an army that we should enlist to ensure that our country and our world is passed onto the next generation enhanced – that should be core to what we, as a Conservative party and a Conservative people, believe in.

With the launch of the Conservative Environment Network, I know that those willing volunteers will at last have an organisation to help shape and lead and inspire, which is why I’m so glad that this network has been launched today and so flattered to have been asked to come on board and talk.