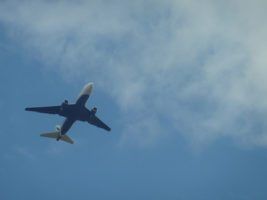 New Runway Would Increase Carbon Costs By Hundreds Of Pounds

According to a report by the Campaign for Better Transport, a new runway at Heathrow or Gatwick could spell the end of budget flights from the UK’s airports, due to charges that would have to be added to meet the UK’s legally binding climate change limits

According to the report, Air Traffic Controls, the increase in costs of return tickets by 2050 if a new runway is built would be up to:

This means a family of four would have to pay up to £883 more for a return flight from London to Florida.

The new research unpicks the complex measures the Airports Commission has claimed will allow UK climate commitments to be met, despite a new runway at either Heathrow or Gatwick substantially increasing carbon emissions from air travel.

Air Traffic Controls shows that the Airports Commission’s plan to increase ticket prices in order to discourage travellers and so reduce carbon emissions would spell the end of low-cost flights – putting foreign holidays out of reach for people on low incomes.

Leo Murray, one of the report’s authors, said: “There has been far too little scrutiny of the Airports Commission’s proposals for squaring airport expansion in the South East with the UK’s climate change targets, with the details hidden deep inside hundreds of pages of technical reports. Our analysis reveals the Airports Commission’s approach to the climate change problem to be a combination of wishful thinking and reverse engineering.

Building a new runway while still meeting our climate change commitments is expected to add hundreds of pounds to the cost of flights from all of the UK’s airports if the Commission’s proposals are enacted.”

Building a new runway while still meeting our climate change commitments is expected to add hundreds of pounds to the cost of flights from all of the UK’s airports if the Commission’s proposals are enacted.

Stephen Joseph, Chief Executive of Campaign for Better Transport, added: “This important report is very clear, if the Government approves a new runway in the South East it risks either breaking the national carbon budget, or pricing those on lower incomes out of the sky entirely.

“The Airports Commission uses heroic assumptions about technology and efficiency improvements which are at odds with the Government’s own analysis. Worse, the huge sums the Commission proposes adding to the cost of plane tickets to allow a new runway to be built have so far gone almost unnoticed, and have not featured in the debate about expansion.

“There are other options. For example, a Frequent Flyer Levy would keep things affordable for those who only fly occasionally while making sure those who fly much more frequently are faced with a price tag that reflects the impact of what they’re doing.”

Welcoming the Campaign for Better Transport’s report Air Traffic Controls: the hidden costs of a new London runway, WWF-UK CEO David Nussbaum said: “This report exposes the truth that was buried in the Airport Commission’s report: new airport capacity is difficult – and expensive – to reconcile with the need to reduce carbon emissions.

“Before greenlighting any new runways, the UK Government needs to set out a plan illustrating how any new airport capacity would not bust our carbon budgets and unravel our Paris commitments. It must also work with other nations on a strong global deal to cap and reduce emissions from flying. ”