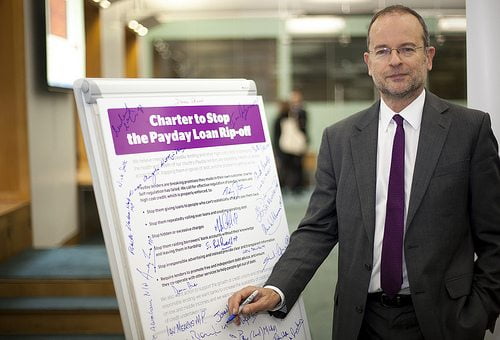 Payday lenders such as Wonga, QuickQuid and Payday UK have been criticised by consumer groups, politicians and even the archbishop of Canterbury in recent weeks, over their excessive interest rates and ‘dubious’ business models which, according to some, make the poor poorer. Sue Lewis, head of a new consumer watchdog, and Labour MP Paul Blomfield, who recently launched a campaign against ‘rip-off’ lending, talk to Blue & Green Tomorrow about the industry.

The Independent reported on Saturday that Sue Lewis, the head of the Financial Services Consumer Panel, had described payday lenders as “a good product” and even suggested that she had compared taking out a payday loan to buying a meal on a credit card.

She ensures Blue & Green Tomorrow, however, that her comments were taken slightly out of context by the paper, and that in actual fact, what she was “defending” was a morally disciplined version of the payday lender.

Morals have played a big part in the payday lender debate, with figures such as the archbishop of Canterbury Justin Welby commenting on their treatment of the most vulnerable in society.

A survey by the Citizens’ Advice Bureau recently looked at complaints made to them by consumers and found that one in five cases were possibly fraudulent on behalf of the loan companies, more than a third involved cases where money was being taken from consumers’ accounts without authorisation, 12% amounted to harassment and 80% of borrowers were not made aware of how to complain. CAB concluded that 75% of cases could have cause for complaint.

It certainly appears to be the case that there is a moral void within many constituents of the payday loans industry. So much so that the regulator the Financial Conduct Authority (FCA) recently launched a consultation to gather a set of recommendations on how to regulate it.

Lewis welcomed the consultation, saying, “There are some awful practices and appalling cases that have been going off within this market and I welcome the FCA’s decision to go out to consultation on this and bring some of these companies under control.

“I do believe however, that the business model of ‘buy now, pay later’ can be really helpful to consumers, but it must be on the understanding from both sides that the amount can be easily repaid.”

The Independent quoted Lewis as saying that she saw no problem with taking out a payday loan to fund a night out, a comment she admits was “probably silly”. However, she stresses the underlying meaning, saying, “If people are taking out a loan for a night out and they can afford to pay it back, then there is no problem with that. If someone takes out a loan fully aware of the rates to be paid back, that is their choice.”

But sadly, not all consumers are taking out loans to pay for a good night out. Paul Blomfield, Labour MP for Sheffield, launched the Charter to Stop the Payday Loan Rip-Off campaign in parliament a few weeks ago. He is also calling for tougher regulations on payday lenders.

But what are people spending the money they borrow from payday lenders on? Blomfield says, “All the evidence from Citizens’ Advice and from Which? shows that the people who are taking out these loans are people who are struggling to make ends meet, whose income doesn’t stretch for a month, who are taking them out for food, for energy bills or for domestic crises where they have no alternative.”

Lewis adds, “If people are borrowing to eat, that’s a social problem that no amount of regulation can fix. There is a wider problem here; we can fix the behaviours of the payday lenders, but then that doesn’t fix the problem that people can’t afford to meet the cost of living. More should be done in social policy to fix these serious problems.”

Coming on to the problem of advertising, Blomfield said the payday lenders were “luring” customers in where the loans aren’t within their interests.

“What these companies are doing is targeting the poor and making them poorer through the charges and penalty payments”, he says.

His charter, which has the backing of more than 40 MPs from all parties in Westminster, aims to tackle these problems through tougher regulations. It also has the backing of CAB, Which? and Church Action on Poverty, to mention a few.

Blomfield says that the UK needs to learn from the tough regulations imposed on payday lenders by other developed countries that they operate in.

“We need to […] get the regulations right and ensure that there’s a tough regime that stops payday lenders from ripping people off.”

He also calls for robust affordability checks, so that consumers aren’t burdened with debt that the lenders know they’re not in a position to repay, adding, “We’ve got a once in a generation opportunity to get this right, we need to get the regulations right so that some of these practices can’t happen.”

Blomfield is the latest public figure to be critical of payday lenders. The archbishop of Canterbury, declared war on payday loan companies back in July, saying he would “compete [them] out of existence”. Labour MP Stella Creasy has also been vocal in the past, leading the Sharkstoppers campaign that is calling for tougher regulation.

Meanwhile, Labour leader Ed Miliband recently promised to force payday lenders to “pay back to communities”, saying he would increase taxes on such companies and give the proceeds to credit unions. These institutions have often been favoured by consumers as the lender of choice.

What is clear is that there is a clear moral disregard by some of the payday loans companies. What they are doing is profiting from poverty and increasing the burden on the poor in order to make as much money as possible.

With the right regulations, which should include stringent checks on potential customers, payday lenders can provide a useful tool, though. They can help increase competition within the credit markets, which is vital.

What they should not do however, is abuse their position of responsibility, as they have done in the past, and profit from the poor.

You can sign Paul Blomfield’s Charter to Stop the Payday Loan Rip-Off here.