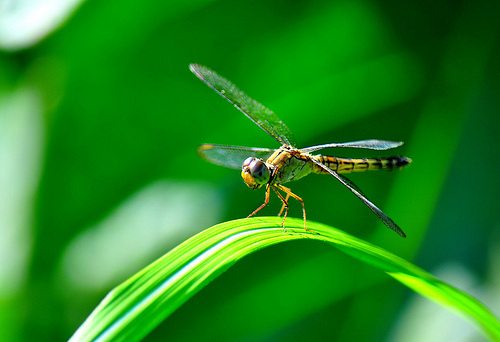 Two studies have revealed that the use of some agricultural pesticides, even at normal levels, can cause biodiversity loss and impact invertebrates in Europe and overseas – as well as being harmful to bees.

A study by aquatic ecologist Mikhail Beketov of the Helmholtz Centre for Environmental Research in Leipzig, Germany, has marked a significant loss of species in the analysed streams in Germany, France and Australia. It revealed that this has happened despite European regulations over pesticides use.

“I think we should care about this because invertebrates are an important part of the food web.”

Another study, by biologist Dave Goulson of the University of Sussex, investigates the way in which neonicotinoids – the class of insecticides linked to the bee decline – can remain in the soil and affect invertebrates.

It says their accumulation might threaten species other than bees, including certain seeds-eating birds.

“The bulk of these studies suggest the half-life of these chemicals is between one and four years”, Goulson said.

“If you apply these chemicals once a year on crops, they will accumulate.”

Commenting on the pair of studies, Friends of the Earth senior nature campaigner Paul de Zylva said, “Both studies demonstrate that we simply don’t know enough about the unintended impact of pesticides used in our towns and countryside. What is clear is a marked decline in many pollinating insects over recent years.

“Friends of the Earth is calling for a comprehensive Bee Action Plan to reverse habitat loss and other threats to pollinating insects. Only fast coordinated action will be enough to save our bees.”

The European Food Safety Authority (EFSA) recently highlighted that fipronil was the fourth pesticide found to be harmful to pollinators. An EU-wide ban on the use of three neonicotinoid pesticides is already set to begin in December.