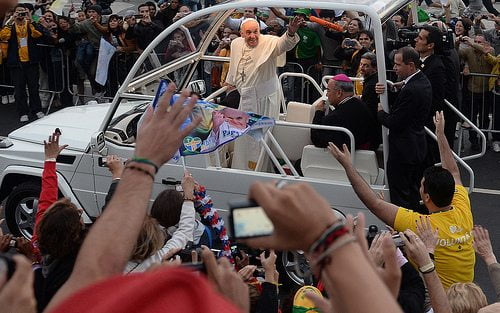 Pope Francis has urged the Brazilian government to treat the Amazon as a “garden” and to help protect its environment and native people.

As 3 million people attended the final mass held on Copacabana beach at the end of his week-long stay in the country, the pope called for “respect and protection of the entire creation which God has entrusted to man, not so that it be indiscriminately exploited but rather made into a garden.”

He met with natives who were forced out of their land by ranchers and farmers that wanted to clear the land for cultivations, timber and graze cattle, causing massive deforestation.

The pope was said to be pleased by the work of the bishops in the region, but said that the church needs to get an “Amazonian face”, in order to do more to protect this vital environment and its inhabitants.

“The church’s presence in the Amazon basin is not that of someone with bags packed and ready to leave after having exploited everything possible. The church has been present in the Amazon basin from the beginning […] and is still present and critical to the area’s future”, he said.

He quoted a 2007 document by Latin American and Caribbean bishops in which they warned over the threats faced by the Amazon, where nature was being assaulted and native people excluded from any planning decisions.

In May, a Brazilian NGO revealed that the speed of Amazon deforestation had increased by 88% in 2012, causing the loss of 1,570 square kilometres of forest.