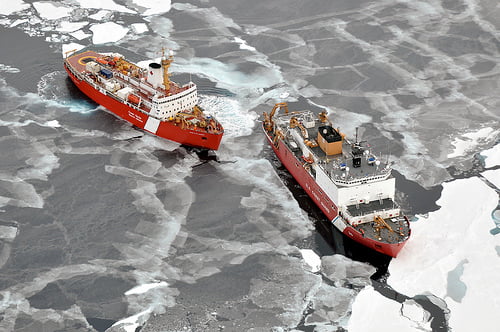 The Atlantic and Pacific oceans could be connected by a shipping route through the Arctic in less than 40 years, if ice melt in the region continues at its current rate.

According to research by the University of California, Los Angeles (UCLA), sea ice in the Arctic has never been so low – which would pave the way for trans-Arctic routes in the future.

The study, which has been published in the Proceedings of the National Academy of Sciences journal, explains “by mid-century, changing sea ice conditions enable expanded September navigability for common open-water ships crossing the Arctic along the northern sea route over the Russian Federation, robust new routes for moderately ice-strengthened ships over the North Pole, and new routes through the north-west passage for both vessel classes.”

Research by the National Snow and Ice Data Centre (NSIDC) in the US last year showed how Arctic sea ice had reached its lowest ever level.

The region has experienced significant exploitation of its natural resources like oil and fish – with oil giant Shell recently revealing its intention to pull out of Arctic drilling for at least the rest of the year, amid safety fears.

Their study says, “Although numerous other non-climatic factors also limit Arctic shipping potential, these findings have important economic, strategic, environmental, and governance implications for the region.”

It’s hard to predict the possible effects of a new set of shipping routes across the region, but efforts to preserve the environment are likely to become harder if the projections will be find true. Rescue missions are also more difficult because of the isolated nature of the Arctic.

In February, Blue & Green Tomorrow reported on a warning by the UN Environment Programme to take serious action for the Arctic, as “by fragmenting the landscape, economic development can interrupt hydrology and endanger ecosystems”.