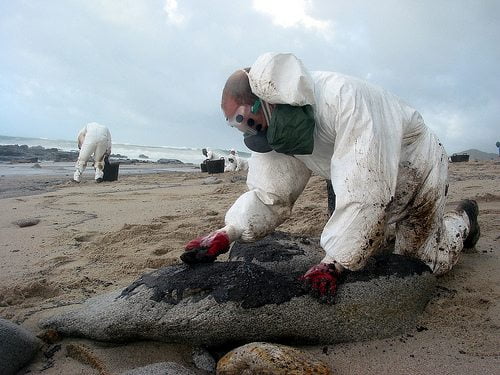 A Spanish court has ruled the country’s government has no criminal responsibility for one of the worst environmental disasters ever to occur in Europe, when the oil tanker the Prestige spilled over 60,000 tonnes of crude oil off the Galicia coast over a decade ago.

In 2002, the ship, which had left St Petersburg for Gibraltar, broke in half off Cape Finisterre and released a huge amount of crude oil, severely affecting fishing stocks, the marine environment and 1,177 Spanish beaches.

When authorities realised that the ship was in a poor condition, they refused to allow it into the port and forced it to go in open sea, where it sank. The government has been strongly criticised over the years for such decision, which led to the oil spill.

The damage was estimated to be around €4.3 billion (£3.6 billion), but neither civil nor criminal responsibility has been found after 11 years. Only the Prestige’s insurer has paid out a total of €22m (£18m) so far.

The ship’s captain has been found guilty of disobedience and was given a nine-month suspended sentence, while none else was convicted for crime against the environment.

The judge Juan Luis Pía said, “Nobody knows exactly what might have been the cause of what happened, nor what would have been the appropriate response to the emergency situation created by the Prestige’s breakdown.”

Greenpeace said that the court’s decision represented “a carte blanche to the oil industry to threaten the environment and citizens”.

“The sentence shows that in Spain we are not capable of passing judgment on an environmental disaster nor even defending the environment”, said Maria Jose Caballero, director of Greenpeace campaigns.