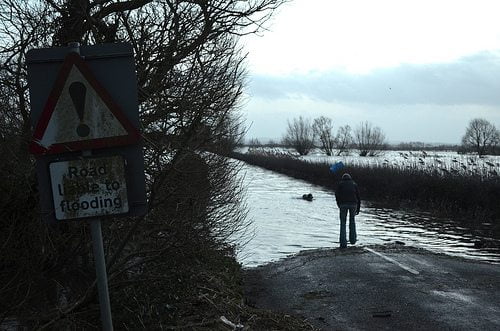 The UK’s flood resilience is being limited by an inadequate budget and lack of regulation, exposing the country to potentially devastating loss caused by flooding as the effects of climate change intensify, the Committee on Climate Change (CCC) has warned.

The committee found that without adequate investment to increase flood defence, Britain is at risk of serious disruption to transport networks, homes, hospitals and water supplies, as extreme weather enhanced by climate change becomes more frequent.

Lord John Krebs, chair of the adaptation sub-committee of the CCC, said, “Despite the disruption experienced by many in the storms this winter, the impacts would have been much worse if it hadn’t been for past investment in flood defences, and in flood forecasting and emergency planning. This is a clear demonstration of the benefits that result from investing in greater resilience, but there is no room for complacency.”

He added that measures to make infrastructure services more resilient to flooding and storms are needed not only by the national government but also from power companies and local councils.

Professor David Balmforth, from the Institution of Civil Engineers (ICE), added, “The Committee rightly highlights the growing need for a more comprehensive approach to UK flood resilience, particularly one that better reflects interdependencies – or the ‘domino effect’ that can be felt across energy, transport, water and waste networks when a flood defence is overwhelmed. This disruption results in an even greater impact on society and the economy.”

A government spokesman commented, “We are spending £3.2 billion over the course of this parliament on flood management and protection from coastal erosion.

“We are committed to addressing the risks from climate change – by increasing awareness and making far-sighted decisions we can address these risks, save money and safeguard our homes and communities for the future.”

The committee made it clear that spending on flood defence must rise, but the government has almost halved the budget destined to fighting climate change under environment secretary Owen Paterson and planned to cut jobs at the Environment Agency, with recent leaked emails confirming the inaction of the Department of Environment, Food and Rural Affairs (Defra) on flooding measures.