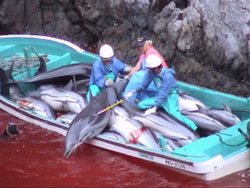 The US ambassador to Japan has said she is “deeply concerned” about the drive hunt dolphin killing that occurs each year in a cove in Taiji, in south-east Japan.

Caroline Kennedy said in a tweet that she is “Deeply concerned by [the] inhumanness of drive hunt dolphin killing. [The US government] opposes drive hunt fisheries”.

The cull of bottlenose dolphins takes place every year in the small Japanese town. Locals defend the practice as “traditional”, although the annual massacre began only in the early 70s.

Fishermen round up the mammals in the cove – which was made infamous by the 2009 documentary of the same name – and decide which animals are suitable for captivity in Japan and overseas, including the US, and which are to be slaughtered.

On Sunday, more than 250 dolphins were closed in by boats, including a rare albino infant, which conservationists say appears to be in distress.

The Sea Shepherd Conservation Society (SSCS), which is sending live updates from the cove, reported, “This now massive pod of more than 250 dolphins includes babies and juveniles, including a rare albino calf who has been clinging as closely as possible to his or her mother in the stress and panic of the drive hunt.

“If not killed, the albino will most certainly be taken as a novelty for Taiji’s local marine park attractions.”

The group said that more than 20,000 dolphins, porpoises and small whales are slaughtered in Japan annually, but the country refuses to sign up for regulation and protection measures.

The Wakayama prefecture, in which Taiji is located, issued a statement against the “psychological harassment” carried on by campaigners, celebrities and people worldwide against the practice.

Kazutaka Sangen, mayor of Taiji criticised Kennedy’s tweet, “I understand her statement as an expression of her concern on this debate.

“There always are the people who say it’s wrong and it’s right, but what we have to see is if fishermen are hunting endangered species or not. They don’t. We are fishing under the permission just like the US does.”