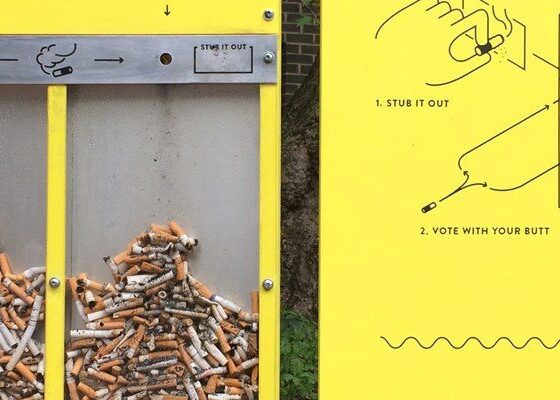 The innovative voting ashtray designed to address the issue of cigarette butt litter in the UK, by leading UK behavior change charity Hubbub, has gone global as councils, governments, and brands around the world, are making orders for Ballot Bin.

Littering cost the tax-payer as much as £850 million in clean up costs each year. A report from the Communities and Local Government (CLG) Committee found that chewing gum and cigarettes were found to be the most littered items, while fast-food litter increased by 20% in the last year.

First featured in the Neat Streets campaign run by environmental charity Hubbub, it aims to jolt people out of their normal littering routine by asking fun questions that smokers have an opinion on.  The voting ballot bins went viral last year and took social media by storm with the burning question ‘Who’s the best footballer in the world? Ronaldo or Messi’.

By popular demand, Hubbub is launching a website www.ballotbins.co.uk where ballot bins are now for sale – councils, brands and leisure facilities have made orders and ballot bins will be shipped to France, Spain, US, Japan. Leading brand BMW have also ordered the voting ballot bins.

The Ballot Bin is a bespoke ashtray that aims to tackle the issue of cigarette butt litter.  A voting system encourages use of the ashtray, allowing the user to vote by choosing one of two slots to dispose of their cigarette butt. Each slot has a window to display the used butts, allowing a public opinion poll to be generated.

The bins and questions asked are customisable; they can take any colour and the questions can be tailored to the interests of local people in the area.  Cities around the world are asking topical questions to engage local smokers – from ‘Who will win the premier league – Leicester City or Tottenham?’, to ‘Who will be the next US President – Hilary Clinton or Donald Trump?’ to ‘Brexit – In or Out?’.

Trewin Restorick, CEO/Founder of Hubbub comments: “The voting bin is a simple solution that has provoked an incredibly positive response. We’ve had requests from around the world for the bin with many countries wondering how they can change the questions to reflect their country’s culture and interests.  So we have taken the plunge and are now scaling up production so that we can sell the bins to tackle the issue of litter in a fun and engaging way.”

The idea of the Ballot Bins is based on the best methods and research findings on how to stop cigarette littering. Hubbub found that litter was mainly generated at night by young men and that cigarette butts are the biggest litter issue in the UK. 35,2% of smokers litter, followed by 26% of people eating chewing gum[1]. The voting bin was a response to these research findings and the sport focused questions reflect the interests of the audience they are trying to reach.

Observational research showed that 29% of correct disposals corresponded to people using the voting bin whilst it was in on the street.

None of the collected cigarette butts will go to landfill. As part of the campaign, Hubbub is developing an innovative partnership with TerraCycle who recycle cigarette butts into a variety of useful plastic products, such as plastic lumber and boards that can be used for items like construction holding, signage and table tops. http://www.terracycle.co.uk/en-UK/brigades/cigarette-waste-brigade.

Sutton will be the first council to introduce the ballot bins. Hubbub is working with Sutton Council to deliver Clean Streets Sutton – a litter reduction campaign that aims to build civic pride and change behaviour towards littering.

Cllr Jill Whitehead, Chair of the Environments and Neighbourhood Committee at Sutton Council, said: “We are delighted to be using the ballot bins as part of a range of measures for our Clean Streets Sutton campaign.

“Changing the behaviour of those who litter is crucial to having a clean, safe environment in our town centers, and also in saving money for the taxpayer. We spend millions each year clearing up waste, and, at a time when our budgets are being severely cut, any savings can make a big difference.”

As part of the campaign, Hubbub will deliver a striking community photo gallery down the high-street, ballot Bins, gum litter activities, and a campaign at the local school.   The activities and installations go live this week with the school campaign day planned on 22nd March 2016.

The Ballot Bins were first introduced as part of Hubbub’s Neat Streets campaign, a social experiment in Villiers Street in London in November last year. Any profits made from the Ballot Bin will go back into the charity and Hubbub’s ongoing work to explore fresh and creative approaches to tackling environmental issues.

The Bins have been available for pre-order on the new website www.ballotbin.co.uk this month.