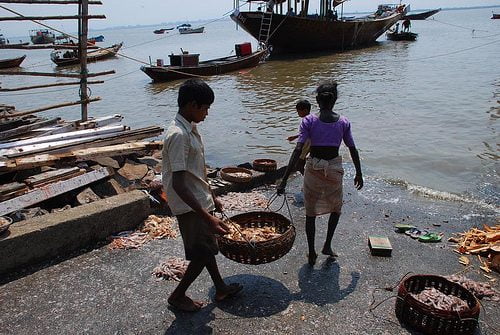 The rapid decline of wildlife as food source in poor countries means that more children are needed for cheap labour to find food, causing social tensions to rise, according to a new study.

New research published in the journal Science has suggested the existence of a link between wildlife crime and subsequent decline and human trafficking and slavery – particularly in relation to children.

Lack of land animals and fish forces locals to put more efforts into searching for food, meaning they often have to hire cheap labour, especially in the fishing industry.

“There’s a direct link between the scarcity of wildlife, the labour demands of harvests and this dramatic increase in child slavery,” said lead author Prof Justin Brashares from the University of California, Berkeley.

“Many communities that rely on these wildlife resources don’t have the economic capacity to hire more labourers, so instead they look for cheap labour, and in many areas this has led to the outright purchasing of children as slaves.”

Such phenomenon is affecting African countries, as well as Thailand, Burma and Cambodia, where children are often used by hunters and fishermen to access remote or difficult areas.

The study refers to the example of declining Somali fisheries, which it says led to the rise of piracy.

Brashares added, “Surprisingly few people recognise that competition for fish stocks led to the birth of Somali piracy. For Somali fishermen, and for hundreds of millions of others, fish and wildlife were their only source of livelihood, so when that was threatened by international fishing fleets, drastic measures were taken”.

“Billions of people rely directly and indirectly on wild sources of meat for income and sustenance, and this resource is declining. It’s not surprising that the loss of this critical piece of human livelihood has huge social consequences. Yet, both conservation and political science have generally overlooked these fundamental connections.”

A recent report by the UN and Interpol estimated environmental crime worth up to $213 billion (£125 billion) a year is financing terrorist and organised crime group.