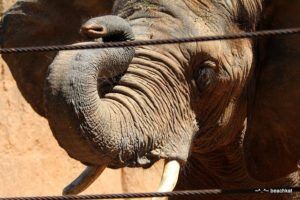 Researchers from TRAFFIC today (31 August 2016) released a report titled “A Rapid Survey of UK Ivory Markets” which found a wide range of ivory items offered for sale in the UK.

In reaction to the TRAFFIC report A Rapid Survey of UK Ivory Markets, Heather Sohl, Chief Adviser on Wildlife at WWF-UK said: “WWF welcomes this report, which provides a useful overview of ivory trade in the UK and its role internationally.  It is most worrying that the survey found mixed understanding amongst traders of what constitutes legal ivory trade.  It demonstrates the real need for the UK government to urgently provide greater clarity and guidance for traders on what is and is not legal when it comes to ivory trade, including where the issuance of certificates is required.  We also urge for discrepancies between importers’ and exporters’ reports on how much raw ivory is traded from the UK to be investigated and resolved.

The illegal ivory trade is an international problem and it urgently needs global implementation of the right solutions.

“The illegal ivory trade is an international problem and it urgently needs global implementation of the right solutions. An estimated 30,000 African elephants are being killed by poachers for their ivory every year, a shockingly high figure that threatens the survival of Central Africa’s forest elephants as well as some elephant populations in East Africa.

“Ivory trade will be a hot topic of discussion at CITES CoP17 starting next month and we need the international community to have a constructive debate on addressing issues that will help tackle poaching and illegal ivory trade, including stronger laws, measures to counter corruption, and more vigilance at key ports, such as Mombasa and Zanzibar, from which ivory continues to be smuggled out of Africa.  Critically, we also need global efforts towards significantly reducing the demand that drives the illegal ivory trade. We call on the international community to use CITES CoP17 to reach agreement on these issues so we can make progress before it is too late.”