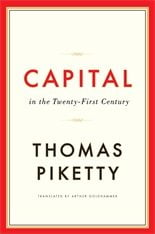 Capital in the Twenty-First Century takes a comprehensive look at wealth and income inequality, investigating how it has changed since the 18th century.

Economist Thomas Piketty analyses datasets from 20 different countries to uncover social and economic patterns, seeking to uncover why the wealth gap remains and is, in fact, getting wider.

He notes that economic growth and the diffusion of knowledge has allowed us to avoid inequalities on the apocalyptic scale predicted by Karl Marx, but argues that inequality is a feature of capitalism that can only be reversed by state intervention.

Inequality threatens to stir discontent and undermine democratic values, Piketty says. He notes that the upward trend has been reversed in the past and could happen again. For instance, after the second world war there was a reduction in inequality in developed nations but this was driven by political choices and policies, which for the most part have now been reversed, he explains.

The quantity of data used throughout the book serves to underline Piketty’s conclusions and adds to its credibility. The author wrote the book with a wide audience in mind and as a result it is clear and direct with little jargon, ensuring those from a non-economic background can still understand the huge amount of information.

In the book, Piketty also sets out his solutions for solving global inequality, including an annual global wealth tax of up to 2% along with a highly progressive income tax reaching up to 80%.

Capital in the Twenty-First Century is a must read for anyone interested in economics and understanding why there is disparity in the way wealth is distributed.