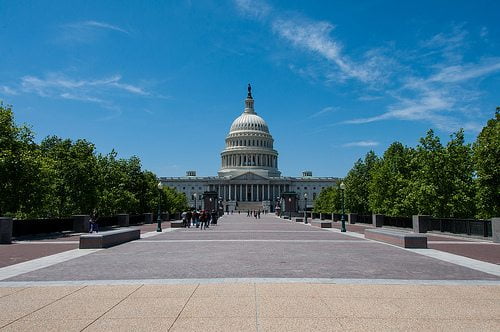 The US government shutdown is a tragedy for those who defend liberal democracy and see the country, with all its flaws, as a beacon of that system. Let us stress, we applaud the view that all ‘men’ are created equal, that we have inalienable rights and that life, liberty and the pursuit of happiness are core to civilisation.

The US federal government was shut down for two weeks due to Republican senators and congressmen objections to the Affordable Care Act. This is the enacted law of a re-elected president, passed by congress and successfully navigated through multiple vituperative and vexatious legal challenges.

The failure to stop the bill caused congress to close the US government and risk the non-repayment of US debt in a high stakes game of political chicken. Government spending had nothing to do with the act, but was used as a last minute bid to sabotage or delay the act. The US dollar is the reserve currency of the world and US Treasury bonds are vital in the financial system. Any non-payment would have jeopardised, if not crashed, the fragile global recovery.

Listening to American politicians who oppose the act is slightly depressing and often quite insulting. After all, the US is our friend and ally, but the constant criticism of one of the innovations the free world is most proud of is depressing. Universal healthcare is one such innovation. Best friends can be critical of each other, but US criticism goes well beyond that.

A country that declares on the Statue of Liberty, “Give me your tired, your poor, your huddled masses yearning to breathe free; the wretched refuse of your teeming shore, send these, the homeless, tempest-tossed to me. I lift my lamp beside the golden door!” doesn’t ask if those tired and poor are adequately insured. But that is what the US health system has done pre-act.

According to some American politicians, a terrible ‘socialism’ has apparently gripped and infected Canada, Australia, New Zealand, Saudi Arabia, Japan, the whole of Scandinavia, most of the EU, and the five nations on these British Isles. Apparently our independently arrived at but common decision to provide universal healthcare is akin to a dreaded socialism, or worse.

Despite this ‘socialism’, we live longer than our American cousins and spend a lot less on healthcare. The US is the third highest spender on healthcare globally after Liberia and Sierra Leone.

The ‘evil empire’ Russia and US nemesis Cuba have a “socialised” universal healthcare system, which irritates it enormously. There are the South American countries where the US likes to undertake covert regime change actions such as Brazil (1964), Chile (1970-73) or Argentina (1976), all of whom held onto universal healthcare.

All these countries provide universal healthcare. Here’s one map (spot the odd democracy out) and another one. 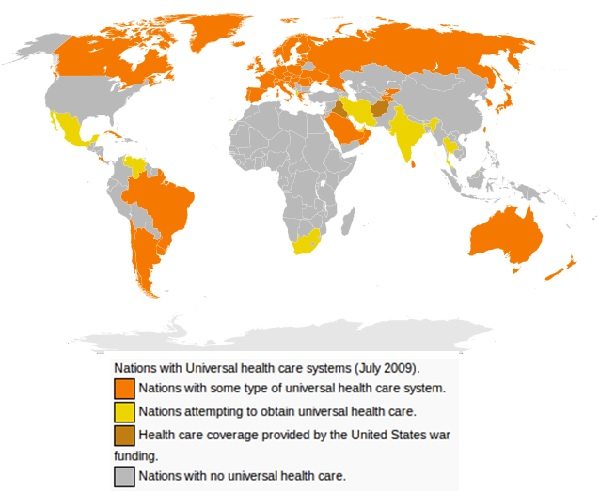 And here’s a chart showing the share of GDP spent on healthcare by country and regions, matched to the life expectancy of those areas. 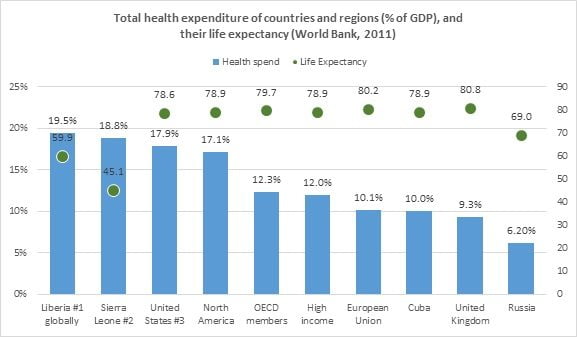 The United States spends almost twice (92% more) as much of its GDP on healthcare than the UK, yet manages to have a population that lives three years less (3%) on average. That’s a bad return on investment for anyone but the healthcare and drug companies and the politicians they sponsor. The United Kingdom achieves a 3% better result in life expectancy for 52% of the cost. We spend less than High Income countries, the European Union and OECD members, and live longer.

The above is exacerbated if you consider we also manage to cover 100% of the population whereas the US system leaves nearly 50m people (15% of the total population) with no health coverage.

Nor are we a socialist country. The home of Adam Smith, the industrial revolution and free trade is unlikely to be such. If this is socialism, then George W Bush was a Communist with the largest Congress-backed public bailout of private industry in human history.

One measure of capitalist nation is the Economic Freedom of the World indicator [http://www.freetheworld.com/] produced by the Canadian think tank, the Fraser Institute. While it has its critics (but few free market thinkers), according to the 2013 ranking the UK comes 12th and the US five ranks below at 17th out of 30 countries.

Holding the US President, the United States and global economy to ransom over an isolated and ideological opposition to universal healthcare which the rest of the free world sees as a norm is reckless and jeopardises the US’s status as “leader for the free world”. You cannot simply lead through military strength if you are a threat to social, environmental, and most of all, economic security.

And finally, sometimes the wisdom of the crowd is right, even if you are the United States of America and the crowd is the rest of the free world (excluding Liberia and Myanmar). Here’s the countries that have not adopted the metric system.