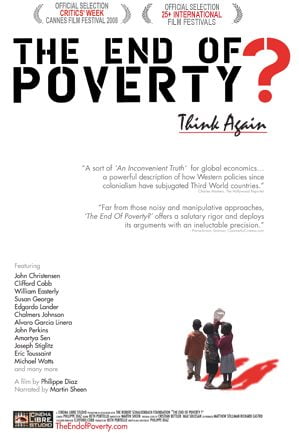 The End of Poverty? is a documentary looking at what caused poverty in the past, what is causing it now and why it should be an issue that concerns us all. It argues that global poverty has reached a new high because of unfair debt, trade and tax policies.

Wealthier, developed nations are accused of exploiting weaknesses in emerging, poorer countries and states where under the current system poverty will not be eradicated. It points out that 20% of the planet’s population uses 80% of its resources and consumes 30% more than the planet can regenerate.

Author Susan George explains, “Sub-Saharan Africa is paying $25,000 every minute to northern creditors, I think people don’t understand that it is actually the south that is financing the north.”

The film offers a glimpse into the lives of some the poorest people in the world and makes viewers question why this level of poverty is allowed in the 21stcentury. Experts, including economists Joseph Stiglitz and Amartya Sen, offer their insights through a series of interviews.

The End of Poverty? contradicts claims that poverty is occurring because of individuals and instead demonstrates how it is the structure creating the issues. Efforts to eradicate poverty currently focus on issues associated with poverty, such as lack of clean drinking water and diseases, rather than tackling the root cause.