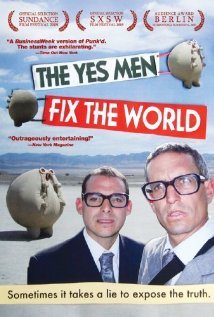 This comedy documentary follows the exploits of the Yes Men, Andy Bichlbaum and Mike Bonanno, as they infiltrate the world of big business and pull pranks to demonstrate how corporate greed is affecting the planet.

The Yes Men aim to show how the ignorance and actions of governments and corporations are affecting normal people and the world in which we live, and highlight how decisions that have negative impacts are made.

The duo go around impersonating spokespeople from government bodies and corporations and say what the companies should be saying, usually that they are sorry for focusing on profits and not considering the long-term. The film also shows the reactions of the people that they are speaking to and how their words resonate.

This film contains five stunts including addressing the Dow Chemical Bhopal disaster, which killed thousands and left over 120,000 needing lifelong care. In order to pressure Dow, the Yes Men went on the news to say that the company would spend $12 billion (£7.3 billion) to pay for medical care, clean up the site and fund research into the hazards of its other products.

In one section of the film, the Yes Men create a mock-up of the New York Times, with the front page headline reading “All the News We Hope to Print”. The paper is filled with fiction stories about military withdrawal from Iraq, building a “sane” economy and new initiatives. It was handed out to commuters to highlight that these events have the potential to become a reality.

The documentary is clever and entertaining whilst still being hard hitting. The Yes Men Fix the World leaves you unsure as to whether you should laugh or cry in many parts, but defiantly leaves you rooting for the activists and wider change.