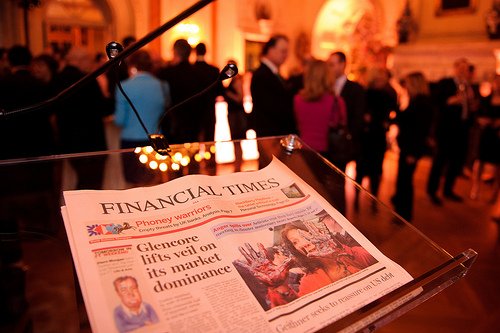 With 2.2 million readers daily and 4.5 million registered users, the Financial Times (FT) is the preeminent business news and information organisation globally. Little did James Sheridan and Horatio Bottomley (described as a financier, swindler, journalist, proprietor and MP) probably imagine the global brand they were establishing 125 years ago today.

The London Financial Guide launched on January 9 1888 but was quickly renamed the Financial Times on February 13. Competing with the slightly older Financial News (1884) it was one of four newspapers that served the City of London. The FT would ultimately beat off its competition, merging with the News in 1945.

In 1893, the FT adopted the distinctive light salmon colour, which has remained its style since, both online – FT.com was launched in 1995 – and off. The paper is now printed in 22 locations globally with five international editions and a Chinese language version.

At launch, it described itself as “the friend of the honest financier and respectable broker”, under the motto, “Without fear and without favour.” The famous “No FT, no comment” was created by Ogilvy and Mather in 1982, and lasted until 2007, when the paper underwent a major revamp and adopted, “We live in Financial Times”, created by DDB London, as its slogan.

As we often report, the 2010 26:1 ratio of financial trades (currencies, derivatives and equities) to real trade makes the tagline particularly apposite.

The most famous section is the daily Lex column, gained from the News, which contains analysis and opinions. FT Weekend is published on Saturday and contains the FT Magazine. The monthly How to Spend It focuses on conspicuous consumption and was described as repellent by The Daily Telegraph.

Editorially, the paper is in favour of free markets and globalisation, and is generally pro-EU as a result. It adopts a liberal stance on social issues and while it was a strong supporter of Margaret Thatcher and Ronald Reagan, it has been sympathetic to the Liberal Democrats and Labour, most recently Gordon Brown – especially the latter’s handling of the financial crisis.

The newspaper founded the FTSE All Share Index in 1962 as a joint venture between the FT and London Stock Exchange. In 1984, it launched the FTSE 100, with the FTSE group becoming independent in 1985.

Part of Pearson PLC, the FT shares its stable with The Economist and Investors Chronicle, and it is one of few newspapers to make a success of operating an online pay wall.

One of the most interesting articles for us in recent times was The parable of the ox by John Kay, dramatised in Radio 4’s More or Less programme. The parable explores the dysfunctional disconnect between financial trades and the markets in which they invest.

Launching the tagline, “We live In Financial Times”, in 2007 was certainly interesting timing and preceded the global financial crisis by months. It would be gratifying if this exceptional newspaper focused much more on living in sustainable and prudential times, rather than promoting the buccaneering recklessness and profiteering that led to the crisis.

We live in unsustainable times.