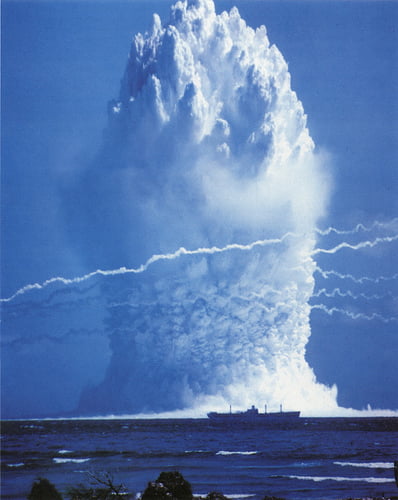 On this day in 1957: first British H-bomb tested in the Pacific

Fifty-six years ago during the Cold War, Britain tested its first nuclear weapon on Malden Island, with many other countries following suit. But these events were not without consequences.

Under Operation Grapple, tests ran until 1958, when the Campaign for Nuclear Disarmament was founded in Britain and moved to the forefront of the pacifist movement.

Nine explosions were conducted high in the atmosphere, in an effort to limit nuclear fallout. Yet a study from a university in New Zealand into the health of veterans present at the explosions showed adverse effects, including on the veterans’ children.

Despite this, the Ministry of Defence claimed that few people were exposed and the effect on them had little significance.

Britain conducted 45 tests, mainly in Australian territory and in the Indian Ocean. Although largely unpopulated, nearby Christmas Island (where later tests took place) is part of the Kiribati Republic, which includes several islands that were not evacuated at that time. The Pacific ecosystem is very delicate; therefore it is extremely easy for nuclear residue to affect places nearby.

France tested weapons in the region until 1991, together with Britain, while more recently, India, Pakistan and North Korea have conducted similar tests there.

Despite the fact many years have passed since widespread testing took place, the effects of thousands of nuclear explosions around the world – but especially in remote areas with few inhabitants – are still visible.

In the Bikini atoll between 1946 and 1958, the US detonated around 23 nuclear devices, moving the population around the small islands. Once the inhabitants had returned to their homes, many developed cancer and had to leave the island again. Even in the present day, many scientists recommend not eating anything from the island, which is still considered uninhabitable.

The French government ran several tests in the Polynesian atoll Moruroa against its people’s will, often with severe consequences. Scientists event noted irregularity in weather patterns in the days after these tests.

The civil use of nuclear power is now widespread and is often seen as an effective way to get low-carbon energy on a large scale. And while nuclear energy may be a necessary evil in the battle against climate change, the impact of proliferation will be forever etched in the memory.