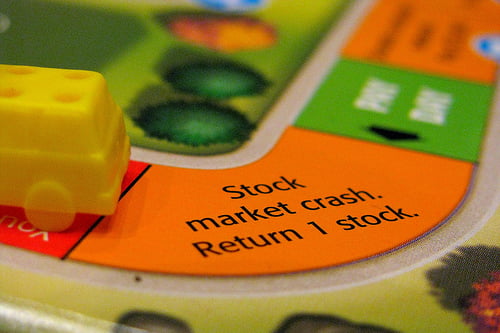 Twenty-five years since Black Monday: what lessons have we learnt?

Twenty-five years ago today, Michael Fish made his fateful on-air dismissal of rumours that there was a “hurricane on the way”. A hurricane certainly was on the way, both in the storm system sense and in financial markets. But have we learnt anything?

October 19 1987 was doomsday in financial markets. Just short of the FTSE 100’s four-year anniversary, the index of leading shares fell 11%, 12% and 6% over 3 consecutive days. The crash that began in Hong Kong spread like wildfire through Europe and into North America.

The all-too-familiar picture of traders, bathed in red light, staring blankly at screens or simply holding their heads in their hands has become the stock photo of the age.

Looking at a chart of the FTSE 100 over the 28 years since it debuted, the sharp boom during 1987 makes a bust look inevitable, but what is most depressing is the slower cycle of rise and fall since 1999. While the falls of 2001 (dotcom bubble) and 2007 (financial crisis) were shocking at the time they represent a repeating cycle of decline and recover, which mean share prices reach and then fall below  their December 30, 1999 peak of 6950.6. 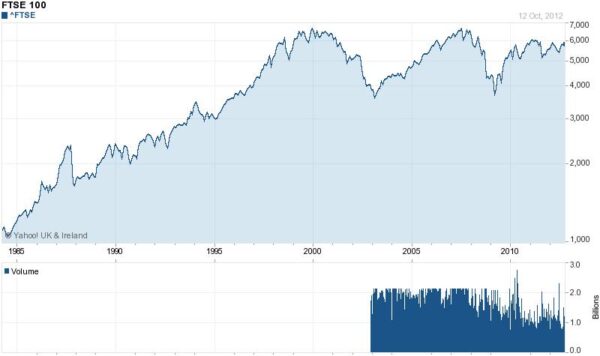 The clear lesson that came from 1987 to the markets was that governments would do absolutely anything to prevent a crisis. Rather than allow the market to find its price, supposed free-market thinkers in central banks propped up those markets. This in turn created the moral hazard we have seen in recent years. “In economic theory, a moral hazard is a situation where a party will have a tendency to take risks because the costs that could incur will not be felt by the party taking the risk.”

Investment banks and traders knew that, however extreme their speculation, if they were too big to fail, the government would ultimately bail them out. This has a reinforcing feedback loop. If losses will be underwritten if they are large enough, wilder speculation can take place.

One can take the view that rather than the 2007 crisis being a failure of markets, it was the inevitable outcome of a market, which has learnt that if it all goes wrong, the losses would be nationalised. If you can take a very high risk and very high return bet, where the profit is all yours and all the losses someone else’s, then why wouldn’t you.

Moral hazard on a planetary scale

Our stock markets are creating a far greater moral hazard, but with something more important than share prices.

Six of the top ten FTSE 100 constituents are involved in oil, gas and mining representing just under 25% of the total index value. More than any other, these companies are creating the pollution and resource scarcity that threatens our future prosperity.

As a resource becomes scarce and demand exceeds supply, its value rises. This creates increased short-term profits, if supply can be maintained. In turn, that creates investment for more extraction. By over exploiting resources from easy to reach places and creating a potential scarcity, these companies have delivered the rising prices that have made it economically viable to exploit harder to reach places, such as the Arctic. By their own actions, they are creating the investment environment that allows them to do ever more damage. This is a virtuous circle for investors, in the short-term, but a catastrophic one for the planet.

Companies are exploiting the moral hazard that they can take risks with our planet today, for short-term private profit, because everyone else will feel the costs tomorrow. The weakness in this thinking is that climate change and pollution do not care where you live or how wealthy you are, so ‘everyone else’ becomes you, your children and your grandchildren.

Even Friedrich Hayek, the favoured economist of free-market thinkers, had something to say about market failures in this respect in his seminal work, The Road to Serfdom.

“Nor can certain harmful effects of deforestation, or of some methods of farming, or of the smoke and noise of factories, be confined to the owner of the property in question or to those who are willing to submit to the damage for an agreed compensation. In such instances we must find some substitute for the regulation by the price mechanism. But the fact that we have to resort to the substitution of direct regulation by authority where the conditions for the proper working of competition cannot be created, does not prove that we should suppress competition where it can be made to function.”

Even the great warrior against social planning says that the government should have a regulatory role when it comes to environmental policy.

The debate in government and media is dominated by the current financial crisis. It has made environmental discussion seem like a distraction for many politicians and commentators. The reality is that a sustainable future is built on investment in non-extractive industries, clean energy and technologies. The race to keep up with relentlessly rising demand needs to become finding innovative ways to live within our means, using less, rather than more.

Markets cannot do this alone but they are very good at reacting to signals.

By choosing not to invest in mature energy-intensive, extractive industries and opting for fast-growth, innovative and clean ones, you are sending a signal to the market that this is where money should be invested. By buying from companies that behave sustainably, you create profits, which are a powerful signal that these sectors deserve more investment. As we report today, many investors are already making a sustainable choice.

Do not let politicians and the media, who have a stake in maintaining the status quo (to secure party funding and advertising respectively), get away with misinformation. They are lying to you and you are smart enough to see that.

Hurricanes really are on the way, both literally and metaphorically, unless we all act today to create a more sustainable future.