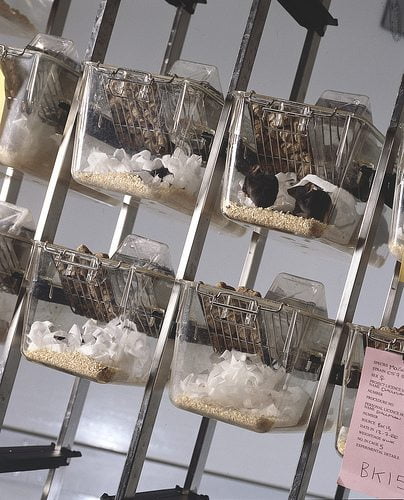 The number of animals used in medical procedures or drug testing increased by 0.3% in 2013, with 4.12 million animals employed, despite promises by the government to cut their number.

Home Office statistics revealed that the practice of breeding genetically modified animals has risen by 6%, while other procedures declined by 5%.

Mice were used in 75% of the experiments, fish in 12% and rats in 6%, with the remaining 5% including birds, guinea pigs, dogs, cats, horses, sheep and cattle.

Animal welfare and anti-vivisection campaigners have protested against the government’s broken promises to reduce the number of animals used for experiments made in its 2010 post-election pledge.

Troy Seidle, Humane Society International’s director of research & toxicology, said, “Seeing Britain’s animal experiments continue to rise beyond 4 million is a devastating blow for animal welfare, but it also represents a crisis for the quality of our medical research because it shows we’re still locked in to failing animal models that can delay medical progress.

“With over nine out of ten new medicines developed using animal experiments failing when they reach human trials, drug development is in crisis.”

Jan Creamer, president of the National Anti-Vivisection Society (NAVS), added, “We are deeply concerned that genetic modification of animals is being allowed to simply increase year on year.  NAVS investigations have revealed a great deal of pain and suffering is caused by breeding GM animals.”

However, Wendy Jarrett, chief executive of Understanding Animal Research said that the figures are confusing.

“Although the number of procedures, including breeding, has risen slightly, the number of animals used has been reduced by over 15,000 (0.4%). This is slightly confusing, but the difference arises because there are particular cases when animals are the subject of more than one procedure each,” she told BBC News.