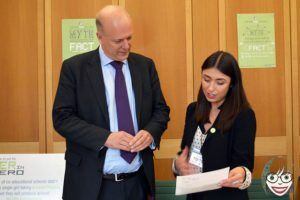 Stephen Joseph, Chief Executive for the Campaign for Better Transport, has reacted to the news of the appointment of Chris Grayling MP as Secretary of State for Transport.

“There’s a tendency for transport policy and spending to be dominated by big infrastructure projects – we hope the new Transport Secretary will focus more on people’s everyday transport needs, such as filling potholes, reversing cuts in local buses, improving public transport, and increasing walking and cycling.

“Transport is important politically because it impacts directly on people’s everyday lives and we hope the new Transport Secretary acts as a champion for a sustainable transport system that works for communities across the country.

“With his own constituency suffering the ongoing problems with Southern Rail services, the situation must be addressed urgently and we need to know as soon as possible when normal service will be resumed and make sure passenger’s interests are prioritised.”

The key issues on the new Secretary of State’s desk include:

The big road and rail projects tend to take budgets and political attention, but to meet the Prime Minister’s emphasis on ordinary families, more focus needs to be on everyday transport that people rely on, meaning investing in more rather than fewer bus services, tackling the £12bn backlog in local road maintenance and potholes and simplifying and reducing rail fares. Year on year there are more cuts to bus services and it is essential that as many local authorities as possible benefit from the Bus Services Bill currently working its way through Parliament.

Local authorities see devolution deals as an opportunity to reverse the cuts to bus services and plan properly for the future.

More local control over transport would give people better and cheaper transport services and make it easier to get around. We need to see more city authorities introduce London-style integration with smartcards and integrated networks, the creation of new passenger transport executives (PTEs) or “Transport Consortia” outside the big cities to join up different councils and the delivery of smart tickets and other transport improvements.

The ongoing problems with Southern Rail services operated by Govia Thameslink need to be urgently addressed. The DfT needs to agree a clear deadline for when services will be back to normal.

With a slew of controversial, environmentally damaging and arguably unsafe road projects on the drawing board, a review of the multi-billion pound Road Investment Strategy programme is surely needed.

With ClientEarth’s air pollution case heading back to the Supreme Court in October, such a move would help reduce the appalling death toll caused mainly by engine emissions and give the Government’s strategy much needed coherence.

Runway capacity in the south east is a major source of controversy for the Government. Heathrow airport is situated in the most congested part of London’s road network and its surface access plans won’t be enough to meet demand. Any improvement in public transport such as new rail links will be filled by future growth in population and won’t have room for the extra airport passengers.