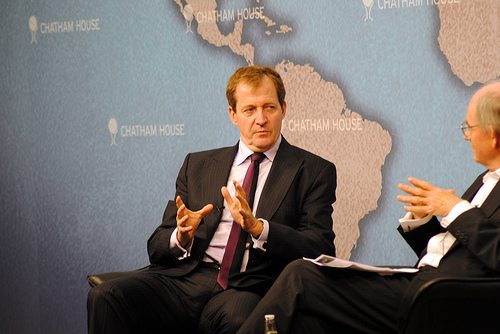 The piece, published online on Friday and appearing in Saturday’s paper, described Ralph Miliband – who died in 1994 – as “the man who hated Britain”. Miliband Jr was given a right to reply, prompting the Mail to ramp up its attack on his father.

A commenter on one of the many related articles published on dailymail.co.uk wrote, “For goodness sake DM, you’re in a hole – stop digging and apologise.”

In the days since the original article was published, attentions have turned towards Dacre, who has been with the newspaper since 1992.

“There is a special ilk of people that work at the Daily Mail, nasty, nasty people and it starts at the top with this Paul Dacre guy who has gone too far this time”, said millionaire businessman Lord Sugar.

“I think the shareholders of the Daily Mail group have got to demand his resignation. He is a tyrant and a he needs to be expelled from the newspaper.”

Lord Sugar was joined by an eminent group of Conservatives in his criticism of Dacre, including former cabinet minister Lord Heseltine, who told the BBC that the Mail was “carrying politics to an extent that is just demeaning, frankly.”

David Cameron and former Telegraph editor Lord Moore are among the other Conservatives to have spoken out in objection to the Ralph Miliband article.

In conversation with the Daily Mail’s deputy editor Jon Steafel on Tuesday’s Newsnight, Alastair Campbell, former communications director in Tony Blair’s Labour government, said, “If you do not conform to Paul Dacre’s narrow twisted view of the world, as all of his employees like John Steafel have to do, you get done in. Once you accept you are dealing with a bully and a coward you have absolutely nothing to fear from him.”

Despite the calls for his resignation and speculation about his future, it was reported on Wednesday that Dacre had actually agreed a new contract.

A letter sent to the Guardian on the same day said, “I loathe the Mail and its politics because it expresses everything that is foul about the right-wing in this country. That does not mean I am the less patriotic. Quite the reverse. It is because I love my country that I find the Mail unpatriotic, nasty, intolerant and everything that demeans Britain.”

Meanwhile Match of the Day presenter and former footballer Gary Lineker tweeted on Tuesday, “Only a matter of time before Dacre resigns. It’s what he would demand of another in this situation. Unless of course he’s a hypocrite.”

How much are you hated by the Daily Mail?