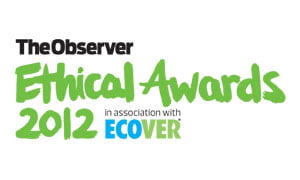 The Observer has drawn up the shortlist for its annual Ethical Awards, celebrating projects, businesses and campaigns that are making sustainability a reality.

The list of nominees was compiled and judged earlier this month by a panel consisting of Colin Firth and his wife Livia Giuggioli, Lily Cole and Ben Fogle, and can be seen in its full glory below.

Dr S. Oliver Natelson – A community campaigner who has worked for over 30 years supporting the local wood and nature reserve in Barnet. He also works for an organisation for the blind and campaigns about the negative impact of environmental changes on the habitat of bats.

Patrick Frew – A community leader in Ballymoney, Northern Ireland, who engages people of all ages in environmental action.

Digi Steps – Established by four students three years ago, Digi Steps aims to bring about digital inclusion for those most alienated from today’s technologies by providing one to one training sessions.

Surfers Against Sewage (SAS) – A national movement founded in 1990 in Cornwall that takes action against sewage pollution at surf breaks.

London Youth Rowing – A project that brings the sport of rowing to over 5,000 young people a year in London’s most deprived boroughs.

When China Met Africa – A film highlighting the new problems associated with the Chinese expansion in Africa.

As The World Tipped – A production from Wired Aerial Theatre, Liverpool, that combines aerial performance with film to create a dramatic outdoor show exploring climate change.

Artsadmin – A project that provides creative opportunities to allow artists to engage with issues and concerns whilst being proactive and inspiring against a backdrop of economic crisis.

SafetyNet – A new trawling system that cuts down on the catch and subsequent discarding of juvenile and endangered fish.

Fungi Futures – A company from Totnes that recycles tonnes of waste coffee grounds produced each year in the UK by growing gourmet mushrooms.

Fashion and accessories (sponsored by Vogue.com)

Bottletop – An ethical lifestyle brand that delivers visible and measurable social impact both through its operational activities and through its foundation.

Ecotricity – A green energy company and supplier and generator of eco electricity and gas.

Newlife Paints – Based in West Sussex, it aims to recycle waste emulsion paint back into a premium grade emulsion.

Ethical Fruit Company – A group of companies that specialise in sourcing, growing and packing fairly traded organically grown fruits for the UK market.

Department for International Development – Hannah Ryder – A blog from a UK civil servant showing how economics, poverty and action to avoid climate change and to protect the environment in developing countries relate to real life.

Upcyclist – Reports on artistic projects that show the innovative reuse of unwanted materials and objects.

Four and a Half Bellies – A blog charting the progress that a family of five makes towards planning, shopping and cooking more ethically and healthily, but also economically.

Climate Change Schools Project – A not-for-profit-project that puts climate change at the heart of the national curriculum and makes schools beacons of positive action in their local communities.

Barlow Road Community Agriculture Project – A project working towards turning five acres of overgrown, fly-tipped land into allotments that will be used to supply fresh fruit and vegetables to local households via a bag scheme

The Edible Bus Stop – A community garden founded by locals on the Landor Road, London.

Don’t Bottle Out, Bottle In! – A project with an idea to prevent the daily purchase of plastic drinks bottles in school so that it can be a plastic bottle free zone.

Fact Fashion – Draws attention to important issues, such as the conservation of scarce resources, by producing fashion items that display the powerful numbers associated with these problems.

The winners will be announced at a ceremony in London on May 30, 2012. In the meantime, we suggest you read our Guide to Sustainable Investment for insight into some of the ways your money can really make a difference, and look at Ethical Superstore for ethically-centred goods.