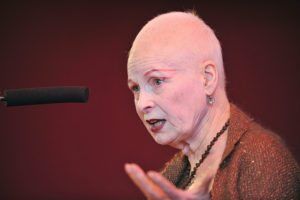 Dame Vivienne Westwood DBE has announced that she will become a patron of the Stop Hinkley Campaign as a result of EDF Energy’s plans to build two large new nuclear reactors at Hinkley Point in Somerset.

The French Trade Unions have declared that they remain convinced the Hinkley project should be postponed until a litany of problems has been solved, and there is increasing speculation that the project will be ditched after the Brexit vote. Now the Stop Hinkley Campaign is re-doubling its efforts to ensure that this foolhardy scheme is cancelled as soon as possible.

Fashion designer and activist, Vivienne Westwood said: “Hinkley Point C is not a solution to the climate change problem. It will simply trap us into the same system that gave us fossil fuels. We need a different sort of economy – a fair economy founded on true human values, and cheap and infinite sustainable energy.”

She continued: “Climate change is a global emergency, we can’t wait around while the big utilities build expensive and dangerous nuclear plant, which is late and over-budget. We need to start building a sustainable energy system now.

I tell my customers ‘Buy Less – Choose Well’. We need to do the same with energy. Our priority should be saving energy first.

It is perfectly feasible, quicker and cheaper, to replace all the proposed nuclear stations by reducing our energy consumption.”

Stop Hinkley spokesperson Roy Pumfrey says: “Vivienne Westwood is a welcome addition to our growing list of patrons. She will be helping us to spearhead a drive for new members. Unlike Government Ministers, she understands that nuclear power is seriously damaging our efforts to tackle climate change. The campaign against the white elephant Hinkley Point C project is going from strength to strength.”