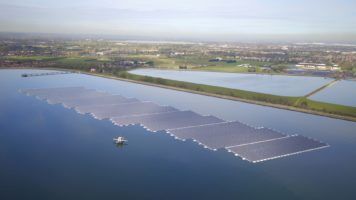 Judges representing some of the biggest names in the legal and energy industries have recognised the success of Lightsource Renewable Energy’s in-house legal team at a prestigious awards ceremony.

The team which has grown significantly over the past five years – from one sole counsel in 2011 to a team of more than 20 lawyers today – was placed ahead of an impressive list of top companies in the In-house Energy and Resources Team of the Year category at The Lawyer’s annual awards.

At a glittering ceremony at the InterContinental O2 hotel in London attended by over 1,300 lawyers, Lightsource secured second place in the In-house Energy and Resources Team of the Year category – ahead of the likes of Shell, Tullow Oil, Ovo Energy, Cairn Energy and National Grid.

Lightsource’s large in-house legal team puts the company in a unique position within the solar industry. The Lawyer’s team of 43 expert judges were also particularly impressed with the team’s involvement with a number of pioneering projects, including the floating solar array at the Queen Elizabeth II reservoir, in London.

A recent company reorganisation, involving the transfer of business its assets, wholly-owned subsidiaries and employees to a newly incorporated company within the group was also handled by the in-house team. More than 3,000 contracts were reviewed as part of the process.

The team also played an integral role in the £284m portfolio refinancing deal consisting of 33 ground-mounted solar installations. The deal represents the largest sterling-denominated bond in the renewables industry and the largest investment by an institutional investor in the solar industry in Europe.

The Lightsource in-house legal team are specialists in areas including finance, property, construction, corporate and energy. The company relies on the team to be involved from the introduction of a project, throughout its life-cycle to completion.

As a result, the team is able to identify the legal, commercial and regulatory issues and apply its legal strategy, negotiating, and drafting skills to address these issues and to structure each project to ensure bankability, viability and efficiency.

Dr Ece Gürsoy, Chief Legal Officer at Lightsource, said: “We are delighted to have been recognised in these awards for our many achievements and hard work to date. Our legal team at Lightsource has put aside the traditional in-house role and positioned ourselves as the company’s proactive strategic consultant. The team is equipped to deal with the shifting demands of the business and is integral in advising on risk and decision-making throughout each solar project’s development to ensure its bankability, viability, efficiency and timely delivery. Having an in-house legal team adds tremendous value as it fulfils the company’s essential business needs.”