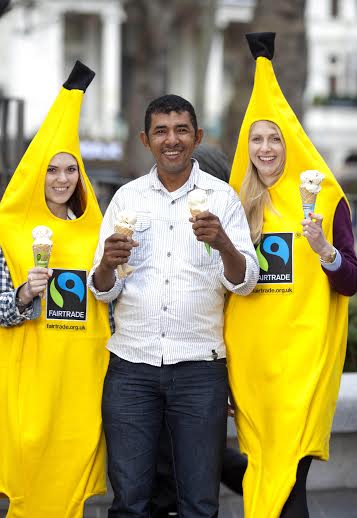 Ben & Jerry’s: Fairtrade is part of our mission

American ice-cream brand Ben & Jerry’s is supporting a campaign launched by the Fairtrade Foundation to make retailers pay more for bananas, as it believes businesses should think about their social impact.

Speaking during the Fairtrade Fortnight in a Ben & Jerry’s scoop shop in Leicester Square, global values-led sourcing manager at Ben & Jerry’s, Cheryl Pinto explained that the company’s mission statement [http://www.benjerry.co.uk/our-values/mission-statement] includes driving positive impact on communities, both on a local and international level.

“If farmers can’t make a living, the industry collapses. Ben & Jerry’s have found a particular niche in the market to ensure that their Fairtrade farmers are able to increase their incomes by buying defective bananas and turning them into a puree”, she said, explaining the measure is also an excellent way to fight food waste.

Ben & Jerry’s was the first ice-cream company to use fairtrade ingredients and for this reason, it has joined the Fairtrade Foundation and banana farmers asking for a fairer market.

Pinto revealed that unlike British retailers, supermarkets in the US have made a voluntary commitment to pay the cost of sustainable banana farming.

“I am very happy to know that there are businesses with ethics like Ben & Jerry’s, which allow the wellbeing of banana farmers”, said Foncho, a Colombian farming promoting the campaign in the UK.

He said he visited the UK Parliament on Wednesday to meet MPs and discuss the issue of underpriced bananas. He also met some young British children and was pleased to know that many of them know of the fairtrade mechanism.