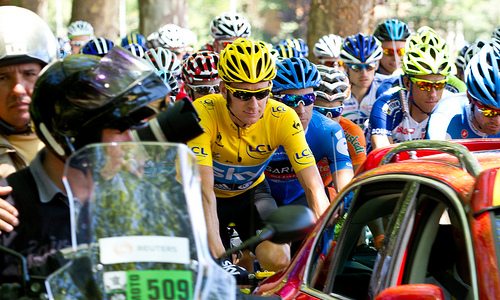 The opening stage of the 101st Tour de France starts in Leeds on Saturday, with the question on most people’s lips being whether British hopeful Chris Froome can keep hold of the yellow jersey he won last year. But for those thinking about the environmental impact of the historic event, wonder no more.

For the first time in 2014, the carbon emissions and waste footprint of the Grand Départ, the name given to the first three days, will be studied by the Carbon Trust and Leeds city council. The pair will produce a report into how these aspects are being managed, along with the long-term impact the event has on transport habits.

It is hoped that any recommendations for improvement will be able to be used at future sporting events in Yorkshire and elsewhere.

Hugh Jones, managing director of advisory at the Carbon Trust, said, “The Tour de France is one of the world’s largest sporting events, reaching a worldwide television audience of 3.5 billion in 188 countries, and attracting 12 million spectators each year.

“Through understanding and reducing the environmental impact of the Grand Départ it is therefore possible not just to create a sustainable event, but to have a big influence with fans of cycling around the world.”

The three-week race, which has been won by a British rider for two consecutive years, visits the UK for the first time since 2007. Starting in Leeds, participants will go through the Yorkshire Dales, York, Derbyshire, Sheffield, Cambridge and Essex, before finishing outside Buckingham Palace ahead of the first French leg on Tuesday.

In total, the event covers 2,277 miles and 21 stages. It ends on July 27 in Paris, with the finish line famously on the Champs-Élysées.

Councillor Mark Dobson, executive member for the environment at Leeds city council, said, “There’s no doubt that the Tour de France will have a lasting impact and we’re keen to ensure that it is a positive one for the environment.

“With all aspects of the event under the sustainability microscope we have a great opportunity to measure that impact with the outcome influencing how major sporting events are managed in the future.”