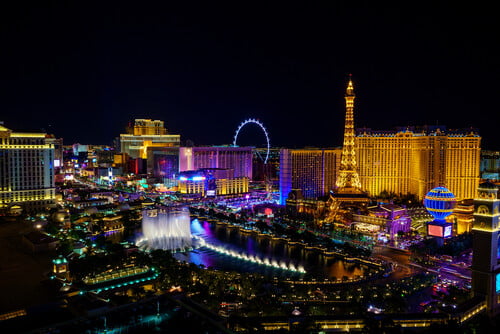 You probably didn’t know that Las Vegas is becoming a green travel destination. The city has left a massive environmental footprint over the past 100 years. However, it has recently started changing its image and focusing on being more eco-friendly. It is becoming a model for solar energy use.

For years, Las Vegas has been known for a toxic environmental footprint. Despite being in the middle of the desert where water is scarce, it has had a large fountain as a tourist attraction. Patrick Sisson of Curbed has talked about the steps that the city has taken to start managing its resources better.

This is causing Las Vegas to attract a new group of tourists. Eco-tourists don’t just come for the attractions. They come to show their support to a city that is starting to take a greener outlook on life. However, these tourists aren’t well prepared for the challenges they will face, including the massive crime. As people that historically avoided the city for its opposition to sustainability, they aren’t equipped to deal with the dangers. They should be aware of the risks.

Las Vegas is among the safest of the world’s tourists’ destinations, but it still has crooks and thieves and with so many people walking around with money, the odds increase that you will get something stolen.

America’s (Adult) playground draws millions each year. They gamble. They party. They are entertained. While Vegas is a great American city, there are some things to avoid to make a visit as positive as can be.

The city often becomes congested and ‘rush hour’ can seem endless. Some drivers become erratic and aggressive and even dangerous. Be vigilant while crossing the street and use the crosswalks.

They are big business in Vegas and because the demand is high, the promoters are aggressive. Don’t be surprised when approached by a group of people each trying to peddle their strip club. If you take one of their brochures, just to be polite, other hawkers will be drawn to you. While the city has been fighting the gaggle of fraudsters, the swarm of swindlers has continued to be a problem.

Vegas is in the desert. When going for hikes or anything else outdoors, carry enough water, and wear the right clothing. If you’re not properly prepared, you’re putting yourself in harm’s way. Carry a reusable water bottle and make sure to take other precautions.

As in any tourist region, the locals often try to take advantage of travelers who may not know better. Be sure to tell the driver to take surface streets while going from the airport to the hotel and avoid the interstate.

Never stop a cab driver for directions. Look for the VIVA patrol which a volunteer unit and part of the Las Vegas Metro Police. VIVA members can be spotted for their bright yellow shirts and caps with the VIVA logo. They can easily be found, walking in pairs, along the Strip, Fremont Street and the airport.

Eyes on the Valuables

Never leave your purse sitting around — even inside the casino. The hotels have adequate security measures, but even they can’t stop every pickpocket and thief. When you’re in a crowded area, your wallet can be taken before you realize it. Remember, Vegas is a draw for professional pickpockets. Vegas is a pickpocket’s Mecca, so don’t make it easy.

Keep your billfold in your front pocket instead back pockets and slot-machine players should keep their winnings as credits until they are ready to cash out.

The streets are filled with a myriad of street performers, called “buskers”. Most are entraining, all try to grab your entertainment dollars and some are out-and-out scam artists. Don’t trust just everyone you meet. Most have some kind of angle to come between you and your money.

Stay away from games outside the casinos. Betting games like three-card monte and shell games are not regulated and are frequently scams which you can’t win — ever.

Downtown Las Vegas used to be a problem area, but has recently improved. However, you still need to be careful if you see areas without many people.

Eco-Tourists Need to Focus on Being Safe in Las Vegas

Las Vegas is becoming a greener city, which means it is attracting lots of eco-tourists. This is a great development. However, it also has a number of risks that need to be addressed. Sustainability hasn’t eliminated the crime problems that plagued the city for years. You still need to be safe when you venture to Sin City!