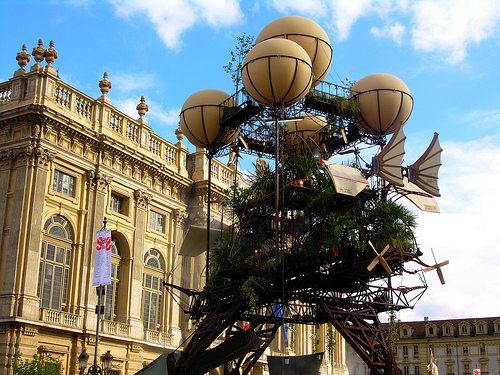 Nantes sits on the Loire river in north-west France, and is the capital city of the Pays de la Loire region. It is a city passionate about its past – its historical separation from Brittany is still contented – but equally concerned about safeguarding a sustainable future.

Having already covered Copenhagen, the current holder of the European Green Capital title, and Bristol, the title-holder in waiting, it seems fitting to write about the 2013 holder, Nantes, which celebrated in some style.

A particular highlight was the Aéroflorale (pictured), a fantastic, Da Vinci-esque ‘flying greenhouse’ that journeyed across Europe and became the iconic image of Nantes’ sustainability triumph.

The city also became the first European city to host the ECOCITY World Summit, hosting a meal for 5,000 people using only food products that would otherwise have been discarded to draw attention to the issue of waste.

Nantes was picked out by the jury behind the European award in particular because of its efforts to cut carbon emissions. The city’s sustainable transport policy encourages the use of public transport and bicycles, and development in the city centre has been geared to minimise car use.

It is also notable for its biodiversity, with 3,366 hectares of gardens and green spaces and several protected natural areas. The city boldly claims that no resident lives further than 300 metres from a green space.

With that in mind, it is perhaps not hard to see why Nantes was named the most liveable city in Europe by Time Magazine in 2004. Though France’s sixth largest city has handed over its sustainability title for now, its recognition should not also end.