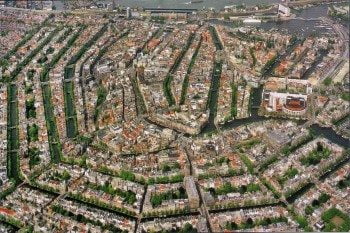 There are more and more cities in the world that are working hard on their eco-friendly credentials to attract travellers as well as provide the cleanest possible environment for those who live and work there. A frontrunner in the best green city has to be that gem of the Netherlands, Amsterdam.

The city has long been known for its lush green spaces, quiet alleyways, the canals criss-crossing the urban environment and the laid-back, slow rhythm of life. Amsterdam, after the canals, is probably best known for being a haven for the bicycle. It’s flat and compact, making it easy to get around and the city is arguably the most bike-friendly in the world. Its infrastructure has been built for bike routes and travellers can easily hire these eco-friendly machines and join the rest of the population as they explore the visitor attractions, restaurants and shops. For cyclists there are plenty of protected paths and bike racks for parking.

According to research from the travel site HouseTrip, Amsterdam is one a number of cities that conserves the most water, and it also has a variety of eco-friendly hotels. As well as hotels, many travellers like to take advantage of reasonably priced apartments in Amsterdam for vacation, and there is a wide range of choice to suit all budgets.

An agreement signed in 2014 with Cisco, one of the world’s leading IT companies, aims to make Amsterdam a green and hyper-connected place, to be known as the “Internet of Everything” city.

Of course the bicycle is the main form of transport but there is a fleet of electric taxis the city has encouraged as part of its greening policy. Cutting out the noxious fumes of gas and diesel driven vehicles it’s making a big contribution to helping a much cleaner urban atmosphere. These taxis can be booked for airport pickups or to take a day out of the city to explore the many beautiful small towns and villages nearby. Travellers need to remember that standard electric cars have a range of only some 140 kilometres or around 87 miles. And, electric cars are quiet, cutting down on the constant noise of throbbing engines found in so many other cities.

Amsterdam is noted for the quality of its cuisine – indeed the Dutch have a reputation for not accepting second best, rather like the French – so there are excellent options to explore food and drink offerings without resorting to fast food chains. There’s nothing intrinsically wrong with fast food and it serves a purpose, but those looking to dine organically, for example, will find a good choice of restaurants and juice bars that care about the environment and from where they source their raw ingredients. After a busy morning riding a bike, lunch can be a fitting reward at a restaurant that serves hearty organic food and, of course, an afternoon of riding will wear that off in preparation for evening culinary delights! It’s also worth taking the time to chill out in one of the famous brown cafés the city has, have a drink or two in these atmospheric pubs and feel gezellig, a Dutch word that roughly translates as cosy or convivial.

With all its canals coupled with a massive harbour, boats are as much of a way of life in Amsterdam as bicycles. The city was originally reclaimed from the sea so waterways are an essential element that can be enjoyed on a tourist boat – there are open-air ones for when it doesn’t rain – or there’s the option for a free ferry ride that can be found behind Centraal Station. Cruising the waterways give a different perspective when looking at the architecture and layout of the city.

Amsterdam is brimming with iconic museums and two of the best known in the world are the Van Gogh Museum and the Rijksmuseum. Van Gogh was a native of the city and the eponymous museum has the world’s largest collection of his work. The Riksmuseum has a huge number of works from the Golden Age and travellers wanting to get up close to some of the greatest works ever produced by Vermeer, Rembrandt and other great artists will enjoy this experience.

Amsterdam works hard on its green credentials and offers a city environment that travellers wanting an eco-friendly experience can enjoy as well as feeling that this a place that welcomes visitors who are interested in experiencing and understanding what it has to offer.